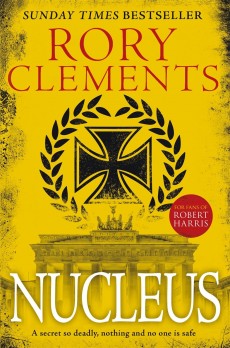 Rory Clements took a huge gamble when he interrupted his Elizabethan espionage John Shakespeare thriller series to launch a new hero in a much more modern setting. But, as always, the former Today, Daily Mail and Evening Standard journalist had done his meticulous homework and picked the perfect time and setting to continue a rip-roaring tradition dating back to Buchan and Wheatley.

Cambridge in the summer of 1939 was a hotbed of invention, innovation, conspiracy and political extremism. The abdication of King Edward VIII had done nothing to heal gaping splits over king or country, fascism or communism.

The infamous Apostles, an exclusive society based at Trinity and King’s Colleges, were flourishing as senior academic Arnold Deutsch – portrayed in the books as Harold Dill – acted as recruiter for the Russians and devised the ‘cover’ for spies like Philby, Maclean, Burgess and Blunt, and others such as Cairncross, Liddell and the American Whiteney Straight.

Into this volatile mix, Clements drops visiting American Professor Tom Wilde, a widowed good-looking, motorbike-riding cross between Indiana Jones and Sherlock Holmes – and surprise, surprise, an international specialist in Elizabethan espionage history, particularly those great spymasters Walsingham and Cecil, whose dedication and ruthlessness helped save England from Spanish domination. His debut in Corpus, the events surrounding the abdication, was spectacular. This second of what will be a trilogy is even more so.

Hitler has invaded Czechoslovakia, but his plans are delayed by scientific developments as German scientist Otto Hahn has produced man-made fission bringing the prospect of the doomsday atomic bomb ever closer. With the French, British and Americans all pursuing similar research, whoever wins the race to make a workable bomb will win what is increasingly looking like a decisive world conflict.

With the Cavendish laboratory at Cambridge, where the atom was split in 1932, one of the leaders in research, it becomes a natural target for German sabotage and when one of its finest brains is murdered, Wilde is drawn into the investigation.

At the same time the Nazis are bankrolling and arming a vicious IRA campaign throughout Britain, and in Germany the persecution of Jews is reaching new heights with deportations to concentration camps quickening and desperate parents trying to get their children to safety via the British-run Kindertransport scheme. America is split with the US-German Bund exercising enormous influence and promoting an ‘arrangement’ with their fellow Aryans and President Franklin D Roosevelt leading support for the Western European democracies.

This all makes for a febrile background to what is really a good old-fashioned thriller. Clements has an immaculate grip on time and place – upper class English society dancing towards the precipice of war; class differences; flashy, but hollow country house parties and tense international politics all blend to make an all-action, fast-moving, dramatic but complex plot. Its many twists and turns make for a vivid and vibrant story line and Clements is far too good a writer to allow the reader to get too settled before the story moves off in a complete new direction.

On a personal level, Wilde’s on/off girlfriend Lydia has agreed to help a Jewish escapee from Germany and her young son. The boy, however, disappears from the train taking him to England, presumably kidnapped in order to put pressure on his scientist mother and putting Lydia at risk from the Gestapo.

A cast of colourful characters, a plot rich in deception and intrigue, and a tangled web of espionage and murder is a real rollercoaster, equally appealing to fans of historical ‘faction’ or of spy fiction and thrillers. This is another standout historical thriller from a fine writer who can turn his hand to any historical period and brings the urgency of a news story to the frame of the novel.