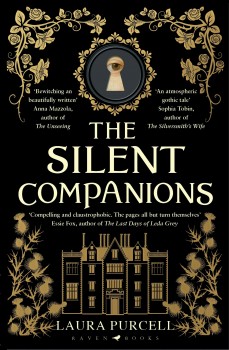 Widow Elsie Bainbridge is held in an asylum, pending possible trial for murder by arson. A doctor attempts to unravel her mental problems and finds a link to her home’s dark past.

Bookseller-turned-author Laura Purcell’s debut has all the makings of a standard Victorian gothic ghost story – young woman isolated in a huge house gradually questioning her sanity – but it is a tribute to her imagination and talent that it is so much more.

This layered, chilling, dark and creepy plot with its unsettlingly claustrophobic atmosphere which owes a nod to Susan Hill’s Woman In Black and Henry James’ Turn Of The Screw, is in fact a full-blown literary horror story spread across two centuries and with a shocking revelation every few pages as it builds smoothly towards its well disguised and horrifying ending.

Set primarily in the mid-1860s, with flashbacks to the 1630s, it could be reckoned a ghost story of sorts, but Purcell’s intense style, smooth and, at times, quite beautiful writing, plus some interesting historical asides, lifts it far beyond that.

A pregnant Elsie Bainbridge leaves her family’s London match factory and home for her wealthy husband Rupert’s ancestral estate following his sudden and inexplicably death shortly after their marriage. When she arrives at The Bridge along with Rupert’s rather timid and downtrodden cousin Sarah, the last Bainbridge descendant, she finds a house full of locked doors, strange noises and neglectful servants. Local villagers live in poverty but refuse to come near the house or occupants, believing both it and them cursed.

The reasons for their superstitious fear – and the family’s absence for the best part of 200 years – is contained in two diaries belonging to the last lady of the house before the Civil War, found in one of the locked rooms.

But it is a completely original touch – the ‘silent companions’ themselves, a Dutch 17th century curiosity, bought to amuse King Charles I and Queen Henrietta Maria during a royal progress. These life-sized painted figures become the focus of the story. Extra layers come from Elsie’s own family background, some explained in detail and some ambiguous, which add an additional dimension and sharpen the folk horror edge to the diary sequences.

Elsie herself is an engaging protagonist, although given the fact that she is locked in an asylum awaiting a possible trial for arson and murder, it’s hard to place too much reliability on her point of view. Sarah is also an interesting character with complex motives – and the relationship between the two women, although at times a little awkward, seems entirely plausible.

The lesser characters, a pioneering asylum doctor trying to apply surprisingly modern techniques to Elsie’s problems; the small, secretive and surly staff at The Bridge; an impoverished local vicar and Elsie’s brother all play their part in building the tension towards breaking point.

If there is to be any criticism of this unnerving and compelling story, some of the dialogue is a little modern, although to modify style and tone between sections set so long apart would not only disrupt the narrative, but also prove near-impossible to achieve.