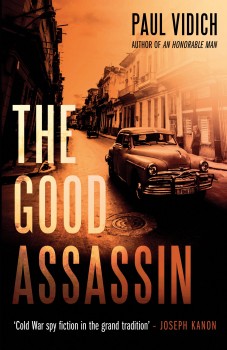 George Mueller, a retired CIA agent, is approached by the CIA director to pose as a travel writer in Cuba to find out if their ‘man in Havana’, Toby Graham, is providing Fidel Castro’s rebels with arms.

George Mueller, a retired CIA agent, is approached by the CIA director to do a small favour that will take a week of his time. It involves posing as a travel writer and going to Cuba to find out if their ‘man in Havana’, Toby Graham, is working against the interests of the United States by providing Fidel Castro’s rebels with arms.

The general attitude of the people towards the revolution is unenthusiastic. They appear so accustomed to being downtrodden that they cannot envision any improvement in their lot. However, it is obvious that the only possibility for change appears to lie with the gradually forming revolutionary forces under Fidel Castro

Having arrived in Cuba, Mueller is by no means certain how he is to proceed with his task, particularly since the director had intimated that he wanted to know how Toby Graham was thinking. The first thing he has to do is locate Graham, but before he can do that he meets Frank Pryce, the FBI man in Havana, with whom it has been arranged that he will co-ordinate. It is immediately obvious that Pryce, who has a contempt for what he regards as the ivy-league CIA, has already decided that Graham is procuring arms for the Castro rebellion and is, therefore, guilty of treason.

Even when he locates his man, Mueller’s efforts to discover the truth seem somewhat perfunctory. He runs into an old university acquaintance, Jack Malone and his wife Liz, with whom he had had a brief affair before she was married, and spends a lot of time with them and the other expats. The reader could be forgiven for thinking that he had forgotten the reason for his being there. Apart from the odd reference to writing his report, he seems to do little to find out what Graham is doing, let alone thinking.

In fact, it comes as something of a surprise when we find him using binoculars to spy on Graham, who remains something of an enigmatic figure. If it is the declared policy of the United States government to support Batista, what are we to make of a CIA officer who distributes food among the poor and clearly sympathises with their fate.

For a novel with the word ‘assassination’ in the title it is surprisingly uneventful for much of its length. It is as if the author finds the political and socio-economic situation in Cuba more interesting that the plot which was established during the opening pages and when a resolution does occur it is all rather hurried and leaves a number of unanswered questions. An attempt is made to deal with the question of loyalty to friends as against one’s duty, but when the friends have so little to recommend them, even that is not entirely relevant.