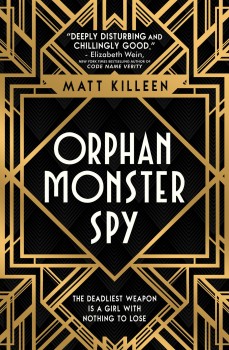 Sarah is an orphan with the skills to become a spy, infiltrating an elite German finishing school on the eve of war to get close to the daughter of a Nazi scientist developing a nuclear bomb.

It’s August 1939 and Sarah and her mother are fleeing from the growing persecution of the Jews in Austria, hoping for a better life in Switzerland. When a group of soldiers stands in their way, Sarah’s mother decides to force past them in the car but is hit in the head by a bullet and killed outright.

Sarah scrambles out of the wreckage and manages to escape, but she’s on her own, on the run, with no money and no one to turn to. But she’s resourceful and determined, and ends up helping Helmut Haller, a man who is also trying to get away. Together they journey to Berlin where Sarah carves out a new role for herself – that of a spy.

Haller is a British agent working to prevent a German scientist developing a nuclear weapon of devastating power, but the only way to get close to him and his well-guarded home is to infiltrate an elite finishing school for the daughters of wealthy and powerful Nazis and get close to the scientist’s daughter. To succeed, Sarah must become everything she most despises.

Matt Killeen effortlessly conjures up a picture of Europe on the brink of war. Seen through Sarah’s eyes, the persecution of the Jews is especially painful, and it’s impossible to read Orphan Monster Spy without the deep shadows cast by the knowledge of what would ultimately happen to so many of them. Sarah herself is a memorable character, a gymnast whose career was cut short by discrimination, a talented linguist taught by her mother who was no longer able to perform on stage, but instead channelled her energy into her daughter’s education. Sarah must bring all her many talents into play to succeed in her mission.

The relationship between Sarah and her handler is at the heart of the story. They bicker like brother and sister, with an ever-deepening bond. Killeen writes sparky dialogue that never slips out of character or out of time, and the plot speeds along at an excellent pace. As Sarah gets closer to her target, the shadows deepen, and it gradually becomes clear that she is in even greater danger than either she or Haller had imagined.

Orphan Monster Spy hooked me from the beginning and the more immersed in the story I became, the harder it was to put the book down. I galloped through it in one sitting whilst laid up in bed for a day with a bad cough. This is an excellent young adult adventure story, told with style.