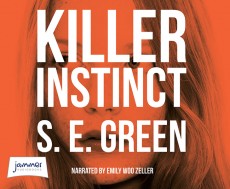 Seventeen-year-old Lane’s obsession with serial killers takes a dangerous turn when it seems that she might be in a murderer’s sights.

Seventeen-year-old Lane is obsessed with serial killers. She wants to know everything she can about them, wants to understand their motives, wants to get inside their heads. Possibly because her own head is filled with a very similar sort of darkness.

When a young, blonde teacher goes missing, Lane starts to take an interest when body parts from her start to turn up in a wide variety of places, including at an ice hockey game she’s present at. The press dubs the killer the Decapitator, and it seems that this is only the latest in a series of crimes that have been carried out across many states over 15 years or more. Lane decides to put her talent for getting inside the mind of a murderer to good use and, with the help of her computer savvy friend Reggie, she sets out on the trail of the killer. But it soon becomes clear that Lane is in the Decapitator’s sights as well …

Lane is a hard character to like. She seems to thoroughly dislike her younger sister Daisy and is very quick to condemn Daisy’s relationships with boys, and seems to have a serious downer on just about everything her sister says and does. She’s pretty touchy when it comes to her own feelings, though, and when Reggie remarks that there’s something creepy about Lane’s obsession with serial killers, Lane is quick to take offence. Her only saving graces are that she’s nice to her younger brother, seems to get on well with her stepfather, and works part-time in a local animal hospital. Lane has a deep dislike of animal cruelty, but she doesn’t extend the same courtesies to human beings.

Character depth isn’t one of the story’s strong points, apart from what Lane reveals about herself. Her friend Reggie is little more than a convenient plot device, always handy on the other end of a phone, but never appearing in person. Lane narrates the story all the way through and her mind is the only one on show. On-off boyfriend Zack isn’t much deeper, and it’s his older brother, a vet at the animal hospital, who Lane takes more interest in.

There are red herrings a-plenty in Killer Instinct, obvious enough that even I had no trouble spotting them, and I know how plot-blind I can be! But the identity of the killer did come a surprise in the final reveal, complete – as ever – with the inevitable ‘explain the plot’ conversation between the Decapitator and Lane.

Emily Woo Zeller’s narration was convincing and wholly age-appropriate, coping easily with both female and male characters of all ages. Killer Instinct kept me awake on a car journey through France and despite Lane being hard to like, I was certainly on her side in the final showdown.