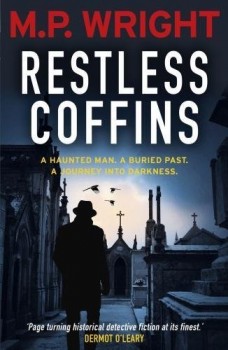 Bristol 1967. Private investigator JT Ellington receives a tragic telegram that sends him on a journey to Harlem, New Orleans and his native Barbados.

This is the third book in the JT Ellington series. Don’t worry if you haven’t read the first two (although you should immediately!) – the story cleverly caters for those who may be meeting Joseph Tremaine Ellington for the first time.

JT is a former policeman from Barbados, a haunted man living with a traumatic past. He has reluctantly fallen into private investigation work in order to get by in 1960s inner city Bristol, a hostile and unforgiving place for any Caribbean immigrant.

The story begins back in 1934 in Ginger Bay, Barbados, where JT and his little sister Bernice go to fish. Here they make a grim discovery amongst the shallow lagoons. We’re then brought back to 1967 Bristol, where JT receives tragic news via telegram from his criminal and yet charismatic cousin Vic.

Now JT is called to take care of matters back home in Barbados. The story takes us first to New York to the streets of Harlem where he meets the alluring Evangeline and characters such as Pigfoot and Clefus, and we’re drawn deep into Harlem’s dangerous and violent underworld. We’re then taken to the warm steamy districts of New Orleans and back home to Barbados where retribution is paid in full.

Whilst there is explicit violence aplenty, it does not feel unnecessary. The twists and turns have a sense of believable realism and a refreshing reflection of the injustices of life. We are not spared from the sad fact that bad things can happen to good people. In light of the harsh realities of JT’s past he still manages to give us hope and leaves us pondering what it means to move on.

Restless Coffins, just like the other novels in the series – Heartman and All Through the Night – are written to create such a heady and rich atmosphere whilst bringing a strong sense of the time and place. You will want to read them again and again. The only downside to discovering this series is that other crime fiction now has a new benchmark to reach.