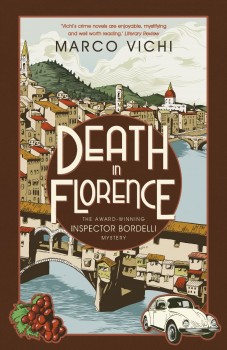 Florence policeman Inspector Bordelli investigates the disappearance of a schoolboy during the torrential rain and flooding of November 1966.

Florence policeman Inspector Bordelli is assigned the case of a 13-year-old boy who disappeared in a rainstorm on his way home from school. Even after the boy’s body is found in wooded hills outside the city, with indications of rape and strangulation, there are no leads until Bordelli makes a wider search of the area and finds a telephone bill.

As a long shot, Borelli has a watch put on the subscriber, but the likelihood of a result appears remote. Meanwhile, the rain continues to fall, culminating in the November 1966 flooding of large parts of Florence and the surrounding districts. One minor compensation for Bordelli is that he is able to get to know a young girl who has stolen his heart, but after a prediction from a fortune-teller fears that their relationship will not last.

Death in Florence is set very firmly in its time and place: firstly by the progress of the flooding which counterpoints the daily progress of the case, secondly in Bordelli’s introspection on the events of the last war, and thirdly by numerous references to the streets and landmarks of the city and to poetry and songs familiar to his contemporaries. Lengthy translations and footnotes are given in explanation of these. While this has its appeal, readers with limited knowledge of Florence or interest in matters now historical may find some of it superfluous, especially if they have come across Inspector Bordelli in his previous five plus outings. The information does, however, contribute to a convincing atmosphere.

Inspector Bordelli himself displays many of the characteristics of fictional police detectives world-wide: drinking and smoking to excess, obsession with his cases, dislike of contact with superiors and cynicism about their motivations, and apparent freedom in the allocation of significant police resources without any need to justify the cost. As he is in his late 50s the last two at least are perhaps unremarkable. That he should fall in love with and pursue a girl some 30 years his junior seems a little unusual, but perhaps not in Italy. Look at Berlusconi, for instance.

Marco Vichi has plenty of competitors in Italian detective fiction, including Giuttari’s Ferrara who also works in Florence. Although some of these tales are very dark, the chill comes from the crimes committed; with Vichi it is his ruminations on the nature of the Italians as a nation that seem so bleak.

Death in Florence ends with a serious misjudgement by Bordelli that precludes the typical satisfactory conclusion. Some may find the blunder lacks credibility, but perhaps Vichi is trying to illustrate that where humans are concerned, happy endings are not to be relied upon.