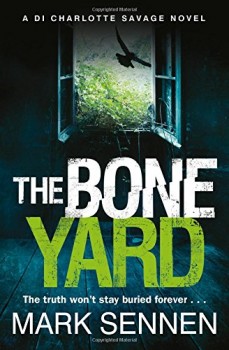 A suspected murderer is returned from the US to the UK after his confession was found to be suspect. Attention turns immediately to him when similar killings start up again near where he is living.

Suspected murderer Malcolm Kendrick is returned to the UK from America where, although the authorities believe him guilty, he has been released because his confessions were found to have been obtained under torture by the mother of one of his victims. He is collected on arrival by DI Charlotte Savage and several of her colleagues who are not happy that he is coming to live in their area of Devon.

A tense situation is made worse when a young girl is murdered in a manner that matches Kendrick’s previous crimes, but he appears to have an alibi. Then, in the Bone Yard, a fenced-off area of wasteland where motor vehicles are dumped, human remains are found which come from several young women. The distaste of the police for the suspicious and arrogant Kendrick flavours their dealings with him and cuts across the way in which the investigations are carried out.

The description of the ensuing investigation is handled skilfully by the author. Local characters are introduced with plausible back stories and enough potential for involvement to keep the reader speculating. The characters, particularly the main protagonists, are believable and engaging, some of them utterly distasteful and eccentric but all interesting. Malcolm Kendrick himself is really not a very likeable person. He’s self-assured and flippant, with an uncomfortable familiarity with others. The setting in rural Devon makes the horrific nature of the crimes even more distasteful, further enhanced by the descriptions of the events in the US.

Mark Sennen is adept at describing place and atmosphere and this adds to the success of the well-paced plot. He captures the isolation of Dartmoor, the claustrophobic nature of small village life and the restrictions placed on police working in such an area perfectly. This was certainly a book that kept me reading, and I found the end very satisfying.