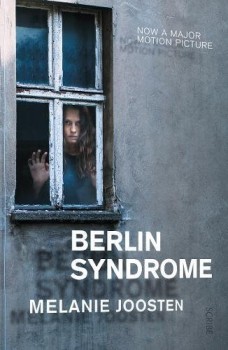 When Australian photographer Clare meets Berliner Andi, she has no idea that she will become a prisoner in his flat and his twisted world of love and secrets.

Berlin is a fascinating city, especially as the recent history has moulded its unique divided character. Australian Clare, the architecture photographer, can’t get enough of the buildings and their secrets. After two weeks of wandering and discovering the place, she is ready to move on and travel to Dresden, so she will be able to add more photographs to her proposed book also featuring Warsaw and Riga.

But then near the site of the infamous Berlin Wall she meets Andi, a handsome, intriguing and polite young man. Their attraction is instant and all-encompassing. It stars with a shared bag of strawberries, then they fall into a desire-filled conversation, slightly awkward at first, with Clare’s confident straightforward way of speaking, and Andi’s shy non-native English. They end up in his flat.

The following morning Clare finds herself locked in. She’s a bit annoyed, but she explains the situation to herself – obviously Andi forgot to leave the key, which is no wonder after such a passionate night.

And then Berlin loses its allure and is only interesting as a potential freedom. All Clare can see through the fifth-floor sealed windows is the famous television tower in a distance, her world shrunk to the confined area of kitchen, bathroom, living room, bedroom and the corridor – ending in the impenetrable locked front door.

She hopes that someone at the viewing deck of the TV tower will notice her but then realises that no such possibility exists. Other windows face a deserted courtyard. She tries to reason, to fight, to escape. Cut off from the world, she becomes a different person, moving between a complete despair and convinced that she will die imprisoned, to complying with the new rules so eventually her captor will allow her to leave.

Intertwined with Clare’s internal monologue is Andi’s point of view, his explanation of the situation. He only wants her to feel secure, happy, and to understand that what they have together is the most beautiful and unique thing. Dreading a life without her, he creates a world with no one else, no outside contact, feeling that his daily job as an English teacher and infrequent meetings with his father only distract the new routine. He brings presents for Clare, shapes her routine and manipulates her thinking. Something akin to Stockholm syndrome develops, complete with feelings of trust or affection.

The tension, fear and despondency are palpable, and so are the smells, light, stale air. Time changes. Some memories float in the conversations, such as Clare’s bustling family and the heat of her Australian childhood, or Andi’s background story: absent mother, East and West Germany. There is plenty of confined ‘now’ but nothing to indicate any future.

Melanie Joosten is an author of essays on aging, and works at the National Ageing Research Institute in Melbourne. This psychological thriller was originally published in 2011, followed by a screen adaptation. This edition of this book is a tie-in with a film released in 2017. Joosten’s astute writing deals with the skewed perception of love, intimacy and care, restricted by the uncomfortable presence of two people. Its culmination is a bit of an anti-climax though.