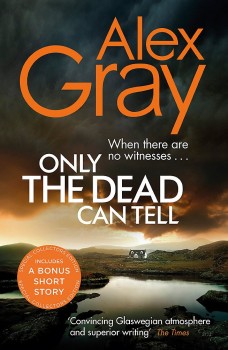 Only the Dead Can Tell

Superintendent William Lorimer and his Major Incident Team uncover links between an apparent domestic murder and a vicious team of people traffickers.

When Dorothy Guildford is found stabbed to death in her Glasgow home, all the signs point to her being murdered by her husband Peter. Forensic psychologist Rosie Ferguson is convinced there’s more to the case that meets the eye and soon finds herself in conflict with senior investigating officer DI Alan McCauley, who is certain the police have their man and is not too fussy about making his case.

Meanwhile as DC Kirsty Wilson searches for evidence that will put Guildford behind bars, she is shocked to discover a link with a human-trafficking operation that Detective Superintendent Bill Lorimer has been investigating for months in the northern oil city of Aberdeen. But before they can question him properly, Guildford, on remand in Glasgow’s famous Barlinnie prison, is brutally attacked in the showers and left in a coma from which it is unlikely he will recover.

With one person dead and another barely hanging on to life, the clock is ticking for the investigators – then the stakes are suddenly raised when one of their own undercover officers is kidnapped by a gang run by a ruthless madman who clearly cares nothing for human life.

More murders follow as the plot builds towards its climax. It’s brutal, but never gratuitously so, and taken all round is one of the best descriptions of a police operation I’ve read – with every character, even those in the walk-on roles, believable and playing their part to the full.

This is the 15th in the series featuring detective Bill Lorimer, now a Superintendent and head of Police Scotland’s Major Incident team. It’s not so much a police procedural with one standout character, but a fine illustration of the various organs of law enforcement and their individual roles in bringing criminals to justice. It’s written with fine eye for detail and the background has been immaculately researched – in fact part of the plot is based on truth and the co-operation between Police Scotland and the Slovakian force to bring down a people trafficking and white slavery and prostitution ring. But it is Alex Gray’s ability to bring her protagonists to life which lifts this far out of the ordinary.

From a talented young DC, torn between her career and her love for her boyfriend who has been offered a job in America, through the heavily expectant forensic psychologist convinced that what looks an open and shut domestic is not what it appears, but terrified of repeating a mistake from her early career, to Lorimer himself and his long-suffering and supportive wife, all are totally believable and intensely human.

It’s time we heard rather more of Gray and William Lorimer south of the border. She’s well worth the read.