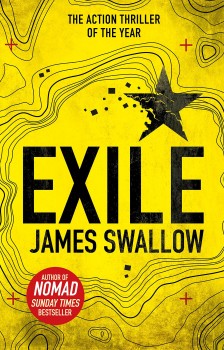 Disgraced former MI6 man Marc Dane faces a threat to the world when a Somali warlord acquires a nuclear weapon.

If you like your adventure thrillers to be a non-stop slug-fest of violence, car chases, hi-tech equipment and exotic locations, this follow-up to the massively successful Nomad is a must for your bookshelf.

Author James Swallow has written more than 40 books, plus scores of scripts for radio, TV and video games. And doesn’t the latter show, as this second adventure for disgraced former MI6 man Marc Dane resembles nothing so much as a literary video game, a sort of Theft Grand Auto in words.

As the player/reader progresses through the ‘levels’, and in near 600-pages there’s quite a few, Dane and his partner Lucy Keyes, the black New York street girl-turned Delta Force sniper (actually the elite American unit is all-male!) face, either singly or together, increasingly deadly and difficult problems, punctuated by some glowing high-end product placement and enough hi-tech trickery to baffle all but the nerdiest.

The plot revolves around a Russian ‘suitcase’ atomic weapon – almost a throwback to a Le Carre plot – then widens to involve a tangled mish-mash of Serbian gangsters, a disgraced Russian general, a Mad Mahdi of a Somali pirate warlord convinced he is carrying out God’s work in seeking vengeance for his people, a cartel of billionaire businessmen, a bureaucratic and ineffective United Nations agency, and a rogue vigilante organisation, run by another African billionaire devoted to stamping out organised criminality when governments cannot.

It races from a secret CIA rendition prison in Poland to the skyscrapers of the United Arab Republics, from an abandoned and storm-beaten oil rig off the African coast to the ancient caverns beneath the city of Naples.

Moving by numbers along the lines of any action movie from the last 20 years – think Mission Impossible, The Man From Uncle – it out-Bournes Bourne and out-Bonds Bond in a positive welter and blood and brains as Dane and Keyes go above and beyond the call of duty to keep the world safe from dictators and crackpots.

Dane is an unlikely and unbelievable superhero – a computer geek who fights like Bruce Lee, drives like Lewis Hamilton, flies any kind of aircraft and without any training becomes an expert in HAHO (High Altitude, High Opening) infiltration parachuting. Keyes also enjoys a battery of improbable skills, including taking on trained men almost twice her size in hand-to-hand combat.

Together they survive a series of contrived, if fairly well written, action set-pieces, all triggered by barely believable happenstance and coincidence and exchange some cringeworthy dialogue. Given the various injuries both apparently recover from in the time it takes them to get back to their feet, both would have been dead by half-way!

If you want your brain exercised by your reading choice, this is one to miss. If you find it hard to sleep on a trans-Atlantic flight, it’s an ideal and undemanding way to pass the hours.