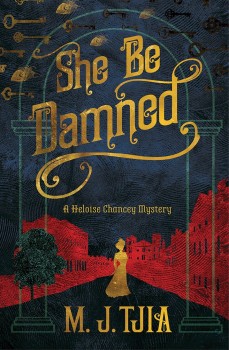 MJ Tjia has chosen what should have been a controversial and daring theme for her British debut. The Australian-raised Eurasian author sets her story, which features a courtesan-turned-detective, in hypocritical Victorian London. Societal reaction to poverty, prostitution and racial hybrids should have offered a platform to launch an explosive and insightful examination of attitudes at the time. Instead, this CWA Debut Dagger entry is a ‘so-nearly’ – a story of what might have been. What could have been a gripping, chilling and suspenseful novel falters into a melange of carnality, brutality and high fashion.

Her protagonist, Heloise Chancey, is a celebrated and beautiful Paon de Nuit, a high-class courtesan and part-time actress who draws her clientele from among the aristocratic, rich and famous of Victorian society. Despite having her wardrobe designed by the Paris fashion house of Worth, she is beginning to worry about the effects of age. Much allusion is made to the struggles of her early years on the streets or in a succession of upwardly mobile brothels, but there is no satisfactory explanation for her translation from cheap whore to an educated, well-spoken, opera-loving call girl at the very top of her profession.

Nor is it clear how she became involved with the business of detection, working on demand for a private agency run by a successful – and knighted – businessman. Equally unclear is the role of her maid, Amah Li Leen, a Eurasian from the Indonesian city of Makassar. Even her name is confusing. Amah, also amma, ayah or yaya, depending on which colonial language you use, is a term throughout the Far East for a woman employed for domestic tasks, usually childcare. Li Leen, mostly in the background as a rather conservative and strict factotum, also features between chapters – and is a character who deserves far more development.

In the London of 1863, prostitutes in the notorious Waterloo area are being found murdered, their sexual organs mutilated and removed. When a pregnant teenage girl of good family goes missing, and with police at a loss, fears grow that she may have become the latest victim. Through a family friend, Heloise is called in to investigate. With the assistance of  Li Leen, her other staff and various street vendors, urchins and prostitutes, she inches towards the truth.

There are plenty of dead ends in what is a fairly simple – and rather disjointed – plot, but both the reason for the missing girl’s disappearance and the eventual killer will be fairly obvious to any experienced reader. If the gutsy, determined and seductive Mrs Chancey and Li Leen are to return, I hope it will be at rather greater length to develop what could become two notable characters rather than staying the sketchy also-rans they are here.