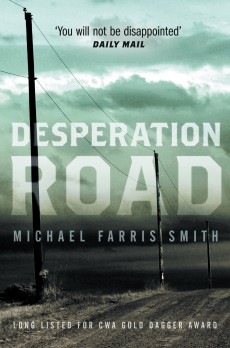 Many years after an event which dramatically changed lives, the two people most affected return to the town but find they still have battles to fight.

Maben, a single mother, and her young daughter Annalee approach the small town of McCord, Mississippi, on foot. Weary and low on cash, Maben is picked up by a dissolute sheriff’s deputy who senses that she is easy meat for himself and his friends. Frightened, and with the understanding that even if she cooperates she will be arrested and unable to return to her daughter, Maben takes dramatic action.

Arriving in town at much the same time is a Greyhound bus bearing Russell Gains, returning home after 11 years in the Mississippi State Penitentiary at Parchman. Russell is not entirely surprised to find two men waiting for him, who give him a brutal beating, ended only by the intervention of bystanders. Unfazed, Russell finds his old home and then renews contact with his father, a widower living out of town with a Mexican immigrant, Consuela.

Alternate passages follow the fortunes of the two key characters Maben and Russell, until by chance they intersect, and it is not long before the connection they have in events 11 years earlier becomes apparent. From then on, their fates become entwined. In the course of the remainder of the book we also hear from various other major players in the drama, including Boyd, another deputy who finds it difficult to square his liking for Russell with the knowledge that Russell is being less than candid, and Larry, one of two brothers who bear Russell a fund of ill-will.

The story is carried by a very flat depiction of the action, a conscious downplaying of the emotions involved, which seems to somehow strengthen the drama of the web within which Maben and Russell are caught. Dialogue is spare and laconic; I especially enjoyed the brief exchange of words with which Russell and his father renew their relationship after an 11-year break. At the same time, the predicament of the characters emerges very strongly: flawed but only too understandable.

In fact, the book gives all the cast their due, even those one is predisposed to dislike. The author gives his range of characters, from the immigrant Consuela to the deputies and from the law-abiding to the dangerous, a voice and a degree of individuality which brings them alive. Life in a small town has never been more convincingly portrayed.

Michael Farris Smith’s prose focuses on small details and has a rhythm that gives it a poetic quality; a comparison with Annie Proulx is not overly enthusiastic. In the land of opportunity, life can sometimes seem predictable without someone of character to change the pattern.