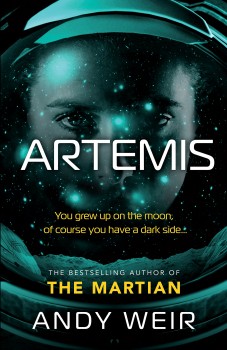 Low-level criminal Jazz Bashara is offered a job for a price she can’t afford to turn down, but it’s not without its dangers, as if life on the moon wasn’t already dangerous enough.

Jazz Bashara is a low-level criminal who lives and works in Artemis, the first city on the moon. If you want something smuggling into the city, then Jazz is the person to go to. She knows the city like the back of her hand, and if there’s a scam going on, she wants in. Her job as a porter is never going to bring in big money, so Jazz knows that to build up her retirement fund, she’s going to have to carry on being creative with her employment opportunities.

When Norwegian businessman Trond Landvik offers Jazz a lot of money in return for an illicit job – a very illicit job – she’s keen to enhance her retirement prospects, even though what he’s proposing is quite a long way out of her comfort zone. But Jazz is nothing if not inventive, and she’s prepared to turn her hand to most things, even high-level sabotage, if there’s enough money on offer.

Having read and enjoyed Andy Weir’s first book, The Martian, I was interested to see how he handled the idea of a crime novel set on the moon. Although Artemis gets off to a slightly slower start than his first book, the world-building is as solidly entertaining as ever and I was quickly sucked in by the description of the moon’s first city and the history of its colonisation, starting with the story of Fidelis Ngugi, Kenya’s finance minister who started the Kenyan space industry from scratch, as spacecraft launched from the equator could take advantage of the earth’s rotation to save fuel. She still runs the moon as its administrator with the help of her chief of security, Rudy DuBois, a man who regards Jazz’s repatriation to earth as one of his life goals.

Weir serves up a solid, well-grounded crime thriller, despite its unusual setting, and although his science is always convincing (not that I would have a clue whether it is completely made up or not, although I can usually spot total bullshit at ten paces) and he’s a master of the art of making info dumps both palatable and entertaining.

Artemis doesn’t quite reach the sustained tension of the Martian, but it’s thoroughly entertaining and makes excellent use of its setting. As someone who was brought up on Fireball XL5, UFO and Space 1999, it ticked loads of boxes for me, and although no one goes around wearing purple wigs, Weir manages to inject the setting with bags of realism and interest and as the final confrontations built to a breakneck climax, there was plenty of excitement. This is one for both crime/thriller fans and sci fi lovers and crosses the genres to good effect.