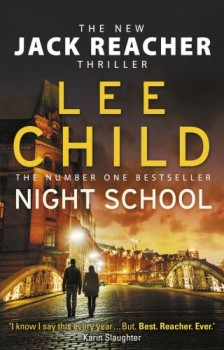 Major Jack Reacher and two others are given a special project concerning a mystery American in Germany.  First they have to find out who he is and why he is mysterious.

When Major Jack Reacher of the Military Police finds himself in a classroom with two American specialists, he knows there is going to be something challenging to tackle. The challenge turns out to be some activity around an apartment in Hamburg. Together with his trusty Sergeant Neagley and his attractive superior Dr Marion Sinclair he begins to unravel the mystery, eventually relocating to Hamburg. Solving problems appears to be his forte, together with a no-nonsense way of dealing with people.

The pace of the book is immediately obvious. Short sentences and a hero who doesn’t seem to do any reflection makes the reading almost too easy – with little time to breathe and certainly no time in places to follow the stages of his thought processes. The danger here is that occasional sentences are so fast and dense as to be almost unintelligible.  For example, “…. the dark-skinned man was acting in an agitated manner, no doubt due to life or death secrets related to regional unrest due to historic inequities.”  It’s hard to change momentum suddenly to think about what this might mean. Indeed, the whole book is so addictive and fast-paced that it is almost impossible to think at all.

Despite the, at times, worrying lack of personal reflection, the main character of Jack Reacher does have some depth. He is certainly a hero figure, usually perceived as effective in his planning and actions, and highly regarded by others with whom he has contact. There is a ruthless streak to him, but also an apparent understanding of human nature, even sympathy at times.

Most of the other characters play small parts, used by Reacher to achieve a successful outcome to the mystery. Several, including the women and the foreigners, are in danger of being somewhat stereotypical. The pace of the story does not lend itself to the development of depth in these more minor characters.

Various plot lines are intricately woven together with the story being told in real time. A great strength of the book is the detail given about certain aspects: for example, the way in which Reacher and Neagley open the door to a room safely – every step is described together with the reasons why they do it that way. On another occasion it is the way in which they approach a top floor apartment that gets the same treatment. It could be boring but instead it is fascinating.

In a similar way, the techniques for solving a problem are apparent: working backwards, predicting, guessing, watching, questioning, following leads and hunches. Once again it is a masterclass for problem-solving. The only time it seems difficult to visualise a scene is near the end, in the final location, despite the careful descriptions. No doubt a second, slower reading of this part would clarify.

The book is definitely worthy of a place in the suitcase, or perfect for some complete escapism from a busy schedule. It’s well-written, fast-paced and has an intriguing plot.