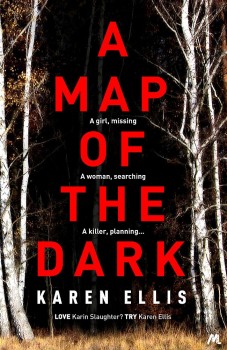 A Map of the Dark

Special Agent Elsa Myer is emotionally torn, hunting for a missing 17-year-old girl, whilst her father lies in a hospital bed, dying of cancer.

The call from Special Agent Elsa Myer’s boss is ill-timed and unfair. It’s Sunday, and she is sitting with her father in hospital, watching the life drain from his cancer-ridden body. But it is a call Elsa can’t ignore. A 17-year old girl has been missing from the Queen’s area of New York since Friday: Ruby Haverstock, a good girl, who isn’t flighty or inclined to disappearing. And Elsa’s boss needs her to support the detective on the case, Lex Cole, as it is his first day on the job.

Lex and Elsa could be a good partnership, but between Lex’s invasion of Elsa’s privacy and too many holes in his initial investigation, they don’t get off to a good start. Worse still, the further they search for the abductor and discover the missing girl’s secrets, the more Elsa’s past rises to the surface. It could be the undoing of Elsa and her family.

A Map of The Dark is a breath of fresh air. It’s a police procedural without a serial killer who is trying to outdo his fictional colleagues with a bizarre and gratuitously gory modus operandi. Written in the third person present tense, the story follows Elsa for the most part. However, it is interjected with chapters from the victim’s point of view. Again, that’s a pleasing departure from the fashionable and common use of the perpetrator’s point of view.

At first, I rolled my eyes when I realised I was on a journey with yet another agent with more baggage than the lost and found room at Paddington station. But it soon became clear that this aspect of the protagonist is more than a way of making her interesting. Elsa is a flawed and troubled woman, and some readers may find her obsession with cutting disturbing. It certainly doesn’t make her an attractive character. Yet there is much to like about her. She shows a degree of personal growth throughout the story, but it is realistically minimal. And that her issues have not been resolved gives a sense that this character will develop further throughout the series.

Elsa’s relationship with Lex is convincing, but there is no developing love interest. I would like to have got to know Lex more. For the time being his character is presented as unflappable and likeable, but he doesn’t leap off the page. Elsa’s relationship with her family (father, sister and niece) is believable. However, from the start it is clear she had issues with her mother, and the foreshadowing is indiscreet.

Where my suspension of disbelief flounders is Elsa’s casual, almost nonchalant, temporary guardianship of her niece. For an FBI agent who specialises in missing children cases, her concerns for the girl’s whereabouts and behaviour seem belated.

There are chapters that are pure backstory, which are relevant to the subplot, not the main story. And at times, the subplot supersedes the main plot. Particularly at the start, the reader does have to wade through multiple paragraphs of introspections/backstory in the middle of conversations, which dislocates the flow.

With a reasonably limited cast of also-ran characters, all underdeveloped, and with an unfortunate bit of stereotyping, the perpetrator comes as no surprise. The dialogue is believable, if not particularly distinctive between characters. There is an imbalance between the forward-propelling dialogue and action, and the slowing effect of introspection, leaving the pacing inconsistent. And although it isn’t particularly detrimental to the plot, I don’t have a sense of place.

Niggles aside, this a complex and gritty read with surprising character depth for a police procedural. Hopefully, now we have had a thorough introduction to the main character, future books in this series will stay more in the present and focus on the crime.