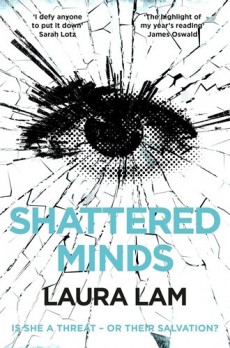 In a future world, virtual reality is used to modify experience but a company plans a new program to control the emotions of the whole population. The Trust, a group of like-minded individuals, are determined to stop them.

Carina, once a gifted programmer, is now an addict, addicted to the mind-altering drug Zeal, escaping into a virtual world to live her dangerous and violent fantasies. She knows that her life is limited but then a virtual reality ghost infiltrates her vision, the ghost of a man with whom she once worked. He gives her information and clues to download memories and data that will enable her to help in overturning the powerful attempts at domination by Sudice, the company for which she once worked.

When young, Carina fell under the power of Roz, while working in Sudice. Roz, now an influential leader within Sudice, is driven to complete her experiments on brain modification and is obsessively driven to regain control over Carina.

Carina gains some control over her life and joins a group of young radicals called The Trust, who need the information from Carina’s brain to stop Sudice from putting a programme into the brain of the whole population, a programme that will allow them to control emotion and opinion and to ensure the dominance of the company.

This story is set in Pacifica, part of the erstwhile US, located in Los Angeles. The future landscape is vividly drawn. The light of the city, the floating buildings, the glow of the plankton farms in the Pacific Ocean are realistically depicted. Most scary, in this vision of the future, is the way that VR has developed, particularly when its effect is enhanced by the drug Zeal, a drug used recreationally by most of the population but which has horrifying addictive properties for some.

Research has allowed brain mapping and memory recording. Implants in the brain and eyes allow thoughts and memories to be projected. To be alone one must block one’s implants. Thus, the Trust require exceptional skills to function clandestinely in such a world.

This novel is so believable. I was drawn into the world thoroughly and swept along at a fast pace. Laura Lam is skilled in giving depth and reality to her future world.