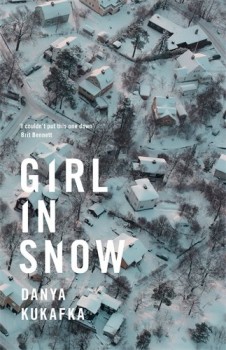 Cameron Whitely is a confused, lonely, anxious, odd and troubled student, fixated on golden girl Lucinda Hayes, believing himself in love with her. Others see him as obsessive and question his voyeuristic behaviour which amounts to stalking. His memory of where he was when Lucinda died leads him to worry that he could have killed her.

Friendless, fat, but courageous Jade Dixon-Burns loathed Lucinda, who had everything Jade wanted, including the boy she is interested in. Her home life – an abusive and none-too-sober mother – has turned her in on herself with an unhealthy interest in witchcraft. She sees herself as the heroine in an ongoing story and records how she feels things should work out in the form of a script.

From its startling opening line through to its conclusion, Girl in Snow focusses entirely on these three richly drawn characters in a series of what can only be described as mournful confessions. All three, two teenagers and a lonely, emotionally closed-off sheriff’s officer, cold towards his wife, but with a love which runs deeper than many are capable of recognising, record their reactions to the killing of high school golden girl Lucinda Hayes in a series of short chapters.

Danya Kukafka has set out to subvert preconceptions of the thriller genre, the American idealisation of the golden girl and what it means to be seen as female. By weaving these narrative perspectives together, she forces the reader to reassess preconceived notions of beauty, gender, mental ability and power.

The main characters often storm against the ways they are perceived, but nevertheless beg to be seen, seeking an audience and space to express themselves. And it is this duality, wanting to exist while not becoming categorised or objectified, which is as much the story’s core as the mystery itself. Kukafka is shrewd to remind us that as readers, we also indulge in the spectacle.

If you’re looking for a fast-paced crime thriller, this is far too slow. This is a piercing look at the darkness that underlies small town living, with unsettled and disturbed characters facing disillusion, disappointment and broken lives.

Whilst the book is hardly plot-driven, Kukafka exercises her gift of exposing the interior lives of her misfit characters. It is a cleverly and hauntingly written story with beautiful descriptions and if you want real complexity in your reading, with the focus firmly on relationships, you will be likely to enjoy this.