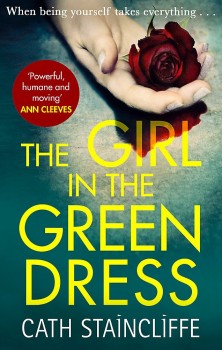 The Girl in the Green Dress

Transgender teenager Allie Kennaway is brutally murdered at her school’s prom night. As Manchester police face the most vicious of hate crimes, two parents must decide how far they will go to protect their own child.

Cath Staincliffe is one of the most adult writers in crime fiction. Her choice of subjects fresh from the headlines and her talent for characterisation, together with her sensitivity and humanity, produces not only intelligent, complex and emotionally engaging plots, but also powerful and gripping stories. She possesses the ability to get into the heads of ordinary people. The Girl in the Green Dress is probably her finest novel yet, emotionally unsparing, powerful, humane and moving.

Manchester teenager Allie Kennaway heads for her school’s prom night but leaves her friends and is kicked and beaten to death in what appears a hate crime because of her transgender identity. As police investigate a brutal killing that has appalled the country, one single mother struggling to cope with her son’s behaviour, begins to fear that his outbursts and silences may hide something darker than adolescent mood swings, and faces the dilemma that if she is right, what should she do? Another parent decides he will fight tooth and nail to save his boy – a promising footballer with a possible career at one the city’s top clubs – from the law.

With a narrative delivered by a wide range of characters, this is a tale of grief, loss and betrayal, welded together with Staincliffe’s close knowledge of how a major investigation works. She weaves an atmospheric story with an in-depth social and political commentary on issues affecting the transgender community. Particularly affecting, while making its point with a vengeance, is a project booklet the dead girl was working on, The A-Z of the T, with a list of facts about the transgender community, including statistics such as 84 per cent consider taking their own lives and one in three actually commits suicide, 19 per cent are attacked, and more than six out of ten face ongoing abuse.

That abuse, almost always anonymous and mostly on social media, merely adds to the pain and grief that Steve Kennaway feels, together with his own recurring doubts about his own role in Allie’s decision to change gender. Some of Staincliffe’s characters give voice to much of the ignorance and prejudice on the subject but are admirably offset by Kennaway’s surviving 12-year-old daughter, a level-headed, practical and together girl who finds that people being what they choose to be is perfectly normal.

The characters are complex, compelling and authentically developed. Donna’s problems with her own family to the devastation of grief of Steve Kennaway are portrayed in a way which cannot fail to be emotionally affecting.

The transgender issues are dealt with simply and factually. The reader hears as much from the victim’s family as from members of the investigating team, giving a balanced view of the issue.

Staincliffe’s writing is taut and sparse, easy to follow and steadily increases the tension throughout the story. This is a timely, brave and brilliant book.