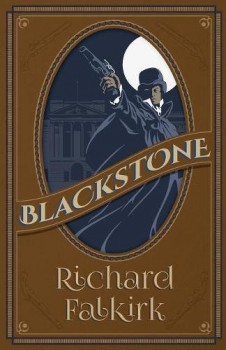 Bow Street Runner Edmund Blackstone is assigned to look after the young Princess Alexandrina Victoria, but things don’t quite go according to plan.

Bow Street Runner Edmund Blackstone has been tasked with protecting the young Princess Alexandrina Victoria. Her mother is convinced there is a plot to prevent her becoming the heir to the throne. Her fears are initially dismissed as the ramblings of a neurotic, insecure woman, but despite that, Sir Richard Birnie, now presiding over Bow Street, must be seen to act. So Blackstone’s protests are overruled and he’s placed in the royal household, ostensibly to investigate the theft of a valuable miniature.

At first, Blackstone remains unconvinced that there is anything worth investigating, but his suspicions are aroused when an attempt is made on his life and it soon becomes clear that someone wants to get him away from the princess.

I first encountered Blackstone in the early 1970s and managed to get hold of two or three of the series in the days before easy access to anything your local bookshop didn’t stock. So when I heard that Thistle Publishing have reprinted the series, I dived on the books with positively indecent haste, but there was a little niggle of doubt at the back of my mind as to how well the books had stood the test of time.

I needn’t have worried. Blackstone, the first book in the series, plunged me back into the dirty, violent world of London in 1826, with its myriad laws but very little order. The Bow Street Runners were often as corrupt as the pickpockets and thieves they spent much of their time amongst, and when the series starts they are in danger of being disbanded in favour of the establishment of a metropolitan police force under the auspices of the ambitious Home Secretary Robert Peel.

Prolific writer Derek Lambert wrote six historical mystery stories under the pseudonym Richard Falkirk featuring the handsome, sardonic Edmund Blackstone, who clawed his way out of the gutters of Holborn to a job where he consorts with people a long way above him on the social scale, and indulges his taste in elegant clothes and well-made guns, whilst still feeling at home in the dirty taverns frequented by London’s underclass.

Blackstone is an easy character to like. At heart, he’s a decent man who dislikes cruelty to both people and animals, something that sets him apart from most of his colleagues. He can be ruthless, and his methods aren’t always legitimate, but he gets results, and that’s what matters (most of the time) to his boss.

London’s sights, sounds and smells are brought vividly to life in this enjoyable romp, as are the characters and Falkirk succeeds in writing a mystery that oozes with authenticity, and he even manages to write himself out of the classic history mystery conundrum of why the events he writes about didn’t make their way into the history books.

Making Edmund Blackstone’s acquaintance again has been a pleasure and I’m delighted he’s back in my life!