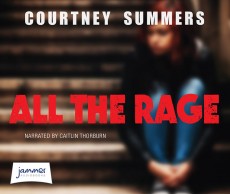 The sheriff’s son assaulted Romy Grey, but no one believed her. Then when Romy goes missing after a school party, she gets little sympathy then, either. And soon another girl is missing.

Seventeen-year-old Romy Grey lives in the small American town of Grebe. A year ago, she was assaulted by Kellan Turner, the sheriff’s son. Romy’s story wasn’t believed and as a result, she becomes an outcast at school, subjected to bullying and constant accusations of being a slut. The assault happened a year ago, and Romy has been living with the consequences every day of her life, coming to think of herself as a dead girl walking, dead inside and dead to the sort of emotion she would rather feel.

She wears red lipstick and nail varnish like body-armour, taking back control over her life with its careful application. She works at the local diner, a job she enjoys and has a good relationship with her mother and Todd, her mother’s partner. Romy’s father is the town drunk, a fact that gets flung in her face with monotonous regularly, all part of the hassle she’s subjected to by her classmates.

When Romy apparently gets drunk at the infamous Lake Wake, an end of term party in which all the teenagers leaving school get together drink too much and generally let of steam. But the party has a darker side, too, as Romy discovers when she wakes up, alone, in the middle of a road, her shirt and bra open, and a scrawl of lipstick on her stomach. Romy has no memory at all of how she got there. Her disappearance provokes a hunt for her, but at the same time, another girl goes missing, Romy’s friend Penny Young, a girl she’d been close to before Romy accused the sheriff’s son of assault.

When Penny isn’t found, Romy gets the blame for that too, with accusations of having diverted the teams who should have been concentrating their efforts on finding Penny.

All the Rage takes a penetrating look at the ever-growing culture of victim blaming. Women are still believed to be the ones at fault when they are assaulted and often raped. They wore the wrong clothes, they got drunk, they went outside after dark on their own. The list of perceived faults in endless and that’s the culture that Courtney Summers puts under the microscope in her hard-hitting YA crime story. She makes it perfectly plain how damaged the assault left Romy, although it’s not until later in the story that a flashback reveals in full what happened.

Romy struggles to forge a relationship with Leon, who works with her at the diner. She wants to get close to him, but puts barriers between them almost automatically. Leon, one of the few black characters in the book, tries to give Romy the space she needs, but there are times when her inconsistent behaviour only serves to push him away. It’s partly through Leon’s eyes that the full magnitude of what happened to Romy becomes clear, although Romy is the narrator of her own story, and that adds to the intensity.

There were times when I felt that Summers’ use of repetition in the narrative slowed the pace down unnecessarily. There’s a fine dividing line between repetition for emphasis and repetition that makes you want to urge the author to get on with it, and there were times when I felt the narrative crossed that line. Caitlin Thorburn’s somewhat one-paced narration adds to the feeling of slowness, but she does an excellent job of bringing Romy, and the other characters, to life. The male voices are often the ones with which female narrators struggle (and vice versa), but both Leon and Todd come over well. The only one that sounds rather like a pantomime dame is the overly high-pitched Sheriff Turner, who doesn’t come out of the story with any credit whatsoever.

All the Rage is hard-hitting and makes uncomfortable listening, but the slow development of Romy’s story against the backdrop of the search for Penny Young is one that won’t be easy to forget. And if it makes even one person question the culture of victim-blaming, then it will have been worthwhile.