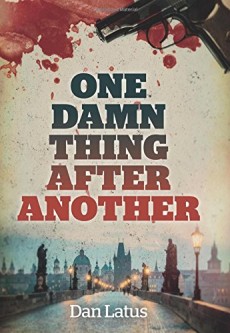 One Damn Thing After Another

Being a Good Samaritan is not without its dangers, as private investigator Frank Doy discovers to his cost.

Frank Doy, a private investigator, is coming to the end of a short holiday in Prague when he goes to the aid of a man about to be abducted outside his hotel. The man is grateful for his help, but his gratitude takes Frank in a dangerous direction.

On a number of occasions, the main character, private investigator Frank Doy, reflects that he could have avoided the various predicaments in which he finds himself if only he had made a decision at the outset not to get involved with a man who is clearly a crook. It is all too easy for the reader to come to the same conclusion and to put the book aside.

It would be misleading to talk about a plot when what we have is simply a narrative punctuated at regular intervals by episodes in which people of no importance are killed in a somewhat casual manner. The places where the killing takes place vary and are normally reached by private plane or helicopter, of which Leon – the man whom Doy originally rescued – appears to have an endless supply. Wherever they land there appear to be no passport controls and the forces of law and order are invariably absent.

Whatever the main protagonists do, they seem to be watched and the enemy is always on hand to thwart their plans. The author tries vainly to add a little mystery to the mix by hinting that somebody is providing them with information. A further attempt to add a little authenticity by mentioning Moscow and Putin also fails.

The ending is very odd indeed. For some undisclosed reason a decision is taken to undertake a project which had been abandoned once. At that time it had had some relevance to what Leon and his family were trying to achieve but what its reinstatement is supposed to achieve is unclear.

The characters are, if anything, even less interesting than the plot. Leon himself complains that he just wants to be left alone to get on with his life – a wish that, since it involves murder and corruption, is not one with which the reader is likely to sympathise. One of his daughters doesn’t baulk at murder to advance the family’s interests but she is at least believable. The other – the ‘nice’ one - is a computer genius who can steal millions of pounds in a few hours at the keyboard and install tracking devices which can evade detection.

Doy himself, who appears initially to be a likable enough person, gradually becomes more and more involved in the crimes of the family – something he does for money, even though he has seen their brutality at first hand. It is difficult to believe that the author expects us to sympathise with him, but it would seem that he does.

All in all, there is very little to recommend this book. Perhaps the previous ones that involve Doy are better, but the temptation to find out is easily resisted.