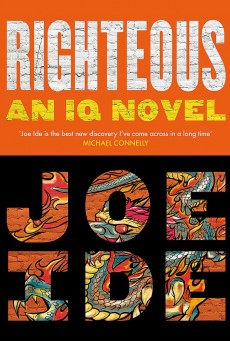 Neighbourhood sleuth Isaiah Quintabe is getting closer to explaining his brother’s death, and is asked to help when a couple of gamblers get into trouble with Chinese triads.

In IQ we were introduced to a young black man known by that nickname who puts his formidable intelligence and talent for deduction at the service of his local South LA community. His success in sorting out problems has earned him popular recognition, despite a difficulty forming close personal relationships after the hit-and-run death of his brother Marcus, who inspired such a positive attitude.

In this, his second outing, IQ finally locates the car and driver responsible for his brother’s demise, and comes to the realisation that the death was not an accident. Working out the chain of events which led up to the crash takes most of the book, by which time IQ comes to see that the picture he held of Marcus was incomplete. Not that this prevents IQ from taking revenge in the worst way he can think of.

Interleaved with this task is a second, undertaken at the request of his brother’s former girlfriend Sarita to help her sister Janine. Janine and her boyfriend Benny are both habitual gamblers and in deep with loan sharks. The girls’ father Ken has been suborned by the 14K triad, who are engaged in a range of criminal activities including the trafficking of women from China for prostitution. IQ sets off for Las Vegas to do what he can, assisted by Dodson, a man with a petty criminal past who is straightening up thanks to the demands of his girlfriend Cherise.

IQ’s attempts to resolve matters bring him into conflict with several criminal parties: the 14K and various linked Chinese hoods, Latino gangs from his area of LA, and a couple of Rwandans who have made it to the US. All are habituated to violence, but come across as more than mere villains; the author explores the background and the preoccupations of the leading characters, making them believable.

But IQ remains cool under pressure and is always observing and thinking, occasionally coming up with Holmesian pronouncements to baffle onlookers. It is probably the need to have someone to recognise these moments of genius that has induced the author to give Dodson a greater role. Under the caustic observations of Cherise, he has shaped up to be more than a self-interested lightweight, and looks like becoming a permanent Doctor Watson in IQ’s further adventures.

IQ undergoes considerable personal development during the book, owing partly to the reappraisal he makes about his brother, and comes to some conclusions about his social life. As a result he looks likely to be less of a loner in the future, and it will be interesting to see if this makes him less of an iconic character. I do hope not. Righteous is great fun, with sharp dialogue and non-stop action, without taking too many liberties with commonsense.