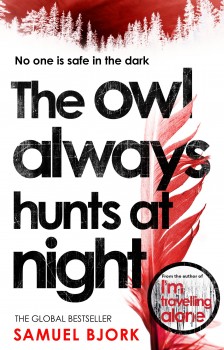 The Owl Always Hunts At Night

A girl is found naked and murdered in a nest of owl feathers. With few clues, the police must find out why she died before the killer strikes again.

This is the second book in the Munch and Krüger series so the author helpfully describes (in the relevant places) how its key plot developments have been influenced by what went before. It might have been better if I had read the first book before this one.

The distinguished homicide detective Holger Munch is in charge of the case and is forced to call on every available resource to help find the killer. This is a police procedural novel but, as is so often the case, rules and procedures go by the board in order to solve the crime.

The plot is linear and easy to follow and the Scandinavian setting is reflected in the darkness that pervades the story in true noir style. The characters are diverse and believable, with intriguing stories of their own. Detective Munch frequently defers to the technical skills of his young colleagues, displaying an awe for new technology that is almost comical. Although it’s an authorial device to explain to the reader, I’m not sure how long Munch would survive in real-world policing without being aware of social media and telephone triangulation techniques.

Munch is reminiscent of Wahlöö and Sjöwall’s police chief, Martin Beck, with his health issues and disastrous personal relationships. In this book, at least, Munch is rather passive and the plot develops through the actions of his colleagues – and of course the perpetrator. I did feel he waited around for Mia Krüger’s moment of inspiration to strike for rather a long time. Mia’s unconventional attitude and dress reminded me of Lisbeth Salander – “her body and her mind were running on artificial stimulants…” – and though she is more socially adept than Stieg Larsson’s character, it was a bit of a worry whether she would survive her suicidal tendencies long enough to solve the crime. The relationship between the two detectives is heart-warming and provides a positive to balance the horror of the crime.

You’d think that the premise that the murderer has a fascination with young girls and with owls would narrow the field of suspects but the author has a few tricks up his sleeve to ensure surprises along the way. Certainly the story is complex. Details – and characters – are gradually introduced and it is hard to tell whether they might be critical or nothing of significance, so I was left guessing for much of the book. It has to be said that one major item wasn’t introduced until very late on, which could be seen as cheating but didn’t spoil my enjoyment of the book. In the same way, we learn more of the victim’s story as the book progresses.

On the whole the plot held together well. I feel that it’s unlikely Mia would have been allowed to act on information received via a covert police surveillance and similarly, CCTV images had been conveniently retained for months, whereas in the majority of cases they are often overwritten in a matter of days or weeks. It mattered not. The short sentences and cliffhanger chapter endings used to build tension kept me gripped to the very end.