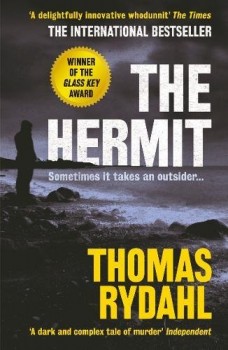 When police find an abandoned car with a body of a small boy in a cardboard box on the back seat, they want to close the investigation quickly. Erhard, an old Danish recluse and a taxi driver on the island of Fuerteventura, decides to solve the murder.

Erhard Jørgensen lives a very simple life on the Canary island of Fuerteventura, driving a taxi, occasionally tuning pianos for the rich or cultural people, looking after his two goats but mostly being a dedicated old recluse in a decrepit house. He’s been like that for nearly 20 years, hiding away from Denmark, although always sending money to his estranged wife and grown-up children.

Nobody knows why, although the island is rife with rumours. Some people consider him to be a wise man because of his voracious love of reading books; others are wary of his acquaintance with Emmanuel Palabras, a powerful yet unpleasant businessman and owner of the rival taxi company. What’s more, Erhard is a friend of his son, Raúl, a reckless party animal, and his vivacious girlfriend Beatriz whom he secretly adores. That friendship seems to be the only substantial connection to the modern world as the hermit remains alienated and alone, drinking, uninterested in news and refusing to use technology, other than his old home phone.

One day an empty car is found on a deserted beach. While tourists and locals take photos of the wreck, Erhard notices something unusual that starts a whole chain of events which no one will be able to stop. A cardboard box containing the body of a small boy is on the back seat, buried in Danish newspaper cuttings. With no traces of a driver and no real possibility to find out who had abandoned the boy, the police are keen to close the case as soon as possible. Fairly quickly they manage to establish that a prostitute called Alina was the mother, and within days she’s due to attend the court hearing. But Erhard doesn’t believe that Alina is the guilty party and hence decides to solve the crime himself, as he has nothing to lose.

After meeting her in one of the dodgy clubs, he offers her money to change her statement, and then kidnaps her to make sure that she’ll understand why they both have to find the real murderer. So far, so fairly standard. Yet the moral compass takes this unlikeliest of detectives on a very strange dangerous journey, sweeping along a doctor who’s breaking the Hippocratic Oath, lovely Beatriz in a coma, possibly dead Raúl, warring taxi companies and other colourful bizarre characters from the party island. Along the way Erhard realises that the killer might want him to confront his own long-buried part.

The beauty of this very unusual novel is that you just have to like the main character, with all his unconventional behaviour, poverty and gloom, sadness and desperate need to love another human being. His choices are morally flawed but somehow understandable as he’s guided by a very simple mantra that justice is a matter of fairness.

The Hermit won the prestigious Glass Key Award and became an instant bestseller in Denmark, thanks to Thomas Rydahl’s skill for excellent observations of the ailing holiday resort and interesting psychological portraits, with a plot that is more existential American than Nordic noir. For the English readers KE Semmel has finely translated the nuances, dark humour and great sense of location where you can feel heat, cold and dirt.