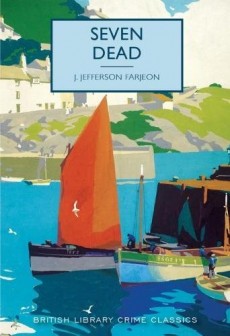 Small-time crook Ted Lyte stumbles on a locked room containing the bodies of six dead men and one woman, and launches DI Kendall and journalist Thomas Hazeldean into an investigation which has its roots deep in the past.

J Jefferson Farjeon, who died in 1955, is one of the lesser known names of the Golden Age, despite his more than 60 crime and thriller novels, and much of his work has been out of print for many years.

Many modern readers will take one look at this strange story, published on the eve of war in 1939, and tell you it explains exactly why! But in his day, his mixture of near-noir skills, a lively English contempt for foreigners and some quite juvenile humour which would not have been out of place in the Goon Show or Round The Horn, was highly acclaimed.

Dorothy L Sayers wrote: “Jefferson Farjeon is quite unsurpassed for creepy skill in mysterious adventures.” And his play Number Seventeen, adapted for the screen by Alfred Hitchcock, his Christmas crime novel, Mystery in White, and others such as Thirteen Guests and The Z Murders brought him a considerable following.

That creepy skill is evident in his opening chapters. A beautifully realised land and seascape draws the reader into a shock opening to what will become a fast moving story, all the more chilling for its first reveal being described briefly with so much left to the imagination.

Down on his luck small-time crook Ted Lyte chooses an isolated house on the Essex coast for his first burglary – and stumbles upon a locked room containing the bodies of six dead men and one woman. Passing yachtsman Thomas Hazeldean, a freelance journalist, sees Lyte as he flees the house and pursues him into the arms of the police.

Detective Inspector Kendall takes on the case and the search for the house’s absent owners. Hazeldean convinces him he can help in the investigation and in pursuit of a clue crosses the Channel to Boulogne – where he finds more than one motive to stay!

Farjeon always had clever plots, but his storylines often tend towards the basic and his apparently constant need to explore the farcical make for an uneven flow. Conversations between characters too often veer toward either the silly or romantic, and here the hero and heroine spend much of their time not telling each other vital bits of information.

There are also far too many coincidences – Hazeldean, having sailed to France to find a girl, discovers her conveniently sitting on a bench as if waiting for him almost the moment he steps ashore!

And any intelligent reader might ask how the same Hazeldean, a ‘maniac yatchsman’ and capable of sailing an auxiliary vessel deep into the South Atlantic could possibly fail to recognise what the cryptic message 59.16S 4.6E means.

There are plenty of other holes to pick ­– Farjeon’s use of ‘Franglais’ to raise the humour stakes, or possibly confuse the reader, Kendall’s ‘investigation’ – most of which appears to be done off-stage while he inflicts some heavy-handed humour on his subordinates – and a rather obvious, contrived and overly melodramatic ending. But as an example of popular pre-war reading, and if you try not to pick up all its flaws and illogical points and skate over the inevitably dated, but still quite touching – if silly by modern standards – love scenes and the lack of much real deduction, this cleverly imagined, at times almost surreal, story still has appeal.