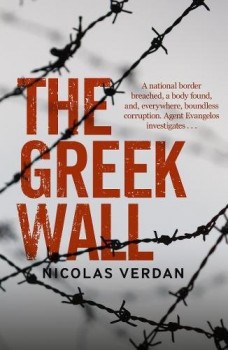 Greek Intelligence agent Evangelos investigates a severed head found on the Greek border but finds the truth obscured by the conflicting demands of vested interests.

A severed head is found on the bank of the river Evros, the border between Greece and Turkey and increasingly a route into Europe for migrants from Africa and the Middle East. Intelligence agent Evangelos wants the truth, but even before he sets off from Athens to investigate the case, he is warned that his findings should do nothing to undermine the Greek case for European funding of a wall to keep out immigrants.

On arrival at the border area, Evangelos is taken to the site where the head was found, which proves to be immediately outside Eros, an isolated brothel, something which was not mentioned in first reports. Eros is now deserted, but a young Russian woman is picked up nearby and claims to have escaped from there after being confined, drugged and ill-used. She admits to having been involved in a fracas but asserts that a man previously unknown to her was responsible for the beheading.

The focus of action is on Evangelos for the first half of the book, but this shifts for a time to the man involved, Nikolaus Strom, known as Nikos. Nikos is of mixed German/Greek parentage and was in Greece hoping to secure the contract for construction of the security wall, at a price substantially less than that quoted by the leading Greek bidder Barbaros. Nikos was in the area at the invitation of a Greek Colonel when embroiled in the events at Eros, and although maintaining his innocence correctly surmises that he will be accused of something, and attempts to flee the country.

The book begins in 2010, and the austerity imposed by the EU is visible throughout Greece with the collapse of economic activity, and noisy protests in the capital and elsewhere; a sense of dislocation and hopelessness is everywhere evident. Greeks have no sympathy to spare for immigrants, who are treated for the most part with indifference. The border, however, is a matter for European-wide concern, as it provides entry to the Schengen Area. Local police and Frontex EU agents operate in the area, not necessarily with the same objectives.

The two main characters, Evangelos and Nikos, are sympathetic individuals caught in a web of political turmoil, corrupt characters and warped institutions. Professional and existential problems get turned over in the minds of the protagonists with more personal concerns: Evangelos with his new granddaughter and Nikos with his parting from a Greek woman. This mixture of personal preoccupations and wider issues feels very realistic and helps to bring the characters to life. It also conveys a powerful and haunting impression of Greece, a place with many attractions as well as considerable challenges.