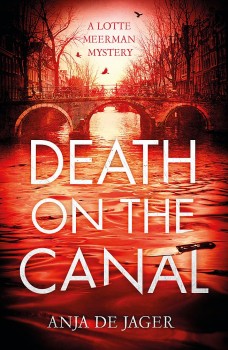 Death on the Canal

Amsterdam detective Lotte Meerman is relaxing at a canal-side bar when a man is stabbed and killed. There looks to be a drug connection, but Lotte is not so sure.

This is the third outing for Lotte Meerman, an independent-minded Amsterdam detective. The book opens with the successful fulfilment of her plan to persuade Mark Visser out for a drink, although further progress is interrupted when a man, Piotr, is stabbed nearby. Lotte tries to help but Piotr dies in her arms.

The next day a man is found dead in a hotel, the victim of drugs allegedly supplied by Piotr. The apparent substitution of heroin for cocaine complicates a major case Lotte’s boss Moerdijk has going, where six tourists died for the same reason. Moerdijk is worried that too much noise will wreck his case, and tells Lotte to back off.

Lotte, however, is not persuaded that Piotr’s death is about drugs. Some of his colleagues at the department store where Piotr worked at a security guard are less than forthcoming about his activities. A woman with Piotr at the bar before he was killed was seen to pass him a photo of a child, and his reaction suggested that this was the crux of the liaison.

Amsterdam has become a popular setting for a crime series: an attractive city with plenty of interesting features, well known to visitors – at least on the surface – but with plenty of seedy undercurrents suitable for exploration. Overexposure is definitely a danger, but Anja de Jager is restrained with the name-dropping of geographical references, and there is plenty of detail reflecting familiarity with the less publicised parts of the city.

Lotte herself is an interesting character, coldly analytical in both her professional life and her personal relationships. Her strategies to get back together with Mark look an awful lot like stalking, and her suspicions of her fellow police suggest that she has difficulties forming personal relationships. Bits of backstory reveal that she is no stranger to trauma, and circumstances show that she is right to be wary of others.

The vulnerability and sensitivity Lotte displays help to direct her antennae when exploring witness statements, and it is evident that this gives her the edge when picking up on minor detail which provides the vital clue. The other side is the exposure to her inner thoughts and feelings, which are sometimes too raw to be comfortable.

The occasional references to previous episodes in Lotte’s life leave some gaps, but these do not constitute a barrier to understanding this latest instalment. Many readers may, however, wish to go back to the earlier books to fully appreciate the challenges which helped to form such an engaging protagonist.