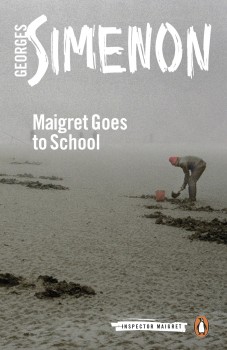 A schoolteacher from the coastal village of Saint-André-sur-Mer, Charente, visits Maigret with a request that he prove him innocent of murder. Maigret agrees to go back to the village with him to see what he can do.

Joseph Gastin, a teacher from the coastal village of Saint-André-sur-Mer, Charente, comes to seek Maigret’s help because he expects to be arrested for murder. A 66-year-old woman, Léonie Birard, who hated the whole world and was hated in turn by everybody in the village, had been shot and killed two days earlier.

The teacher explains that, although there is no evidence against him, virtually everybody in the village believes he is guilty. The sole reason for this is that he’s a relative newcomer to the village and the people are prejudiced against him and protective of each other.

Maigret doesn’t know precisely why he agrees to look into a case over which he has no jurisdiction, except that Gastin appears to him to be the sort of person whom nobody ever takes seriously. In addition, he vaguely remembers an enjoyable holiday in Charente, during which he had eaten oysters washed down with the local white wine. That, together with the fact that it is spring and the sun is shining, puts him in a good mood and he decides to give Gastin a chance.

It soon becomes obvious when he arrives in the village that Gastin has not exaggerated his situation and he is immediately taken into custody. The prejudice against him and his family is clear, as is the suspicion with which they greet the Inspector from Paris. Gastin has done all he can to make himself acceptable, even giving lower grades to his son – his best student – than he deserves, but to no avail. The major occupation in the village – collecting oysters – is almost at a standstill owing to the neap tide and the men appear to spend most of their day drinking and playing cards in the Bon Coin, all of them wanting to believe Gastin guilty.

The police now have a boy’s statement that seems to implicate Gastin. There appears to be no reason for the boy to lie but Maigret is by now convinced that he is innocent and begins a close questioning of witnesses. The way in which he begins gradually to discover what actually happened is logical and precise and he is able to apply what he knows about the psychology of the villagers, having himself been born and brought up in the country and therefore familiar with the way such people think.

One of the charms of a Maigret novel is that it is rarely sensational, the interest generally being maintained by the care and thoughtfulness that Maigret brings to bear on a case. Here, however, we have a storyline that is unusually quiet and restrained, almost as if Maigret were on holiday again. There is no Paris traffic, no rushing about the city. The entire investigation is undertaken on foot and the only time he gets in a vehicle is to take him to catch the train back to Paris. Apart from the fact that he does not get the oysters he had been contemplating, the trip has been entirely successful and justice has been served.