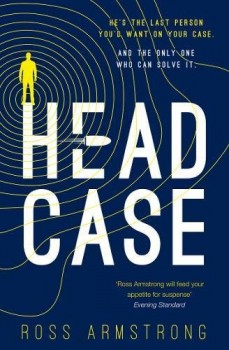 Girls are disappearing, and PCSO Tom Mondrian thinks he’s spotted a pattern that the investigating officers have missed, but no one listens to a lowly PCSO, especially not one with a bullet in his head.

Tom Mondrian has only just started work as a Police Community Support Officer when he’s badly injured on duty, shot in the head to be precise, and after that, life isn’t the same for Tom. He thinks differently now and sees things differently. He can walk again, although one foot drags slightly when he’s tired, and he’s having trouble reading. But that’s not the least of his problems. He’s also still got a bullet lodged in his brain.

Ross Armstrong has certainly come up with an unusual main character, but my disbelief was suspended from a very thin thread when it came to Tom being cleared by both the medical profession and his bosses for a return to work. In the current litigation conscious world, that was stretching things to breaking point for me. That said, even if you react the same way I did to the book’s central premise, I would advocate giving Armstrong – and Tom Mondrian – the benefit of the doubt. Head Case provides a perspective that most police procedurals lack, that of those on one of the lower rungs of the policing ladder.

Tom is paired with fellow PCSO Emre Bartu and together the two look into the case of three girls who have gone missing in the area. Tom sees patterns that others don’t, and he’s certain the investigating officers have missed something. He has a hard job convincing Emre to help him, as his partner just wants to keep his head down and stay out of trouble with their bosses. But Tom isn’t easy to say no to, even when he goes a long way off piste and drags Emre with him.

Tom Mondrian is one of the most unusual characters I’m come across in detective fiction. Very much in his favour is the fact he isn’t a maverick DI called Jack with a drink problem and a shady past, and in a genre that often seems to be bursting at the seams with stereotypes, he’s something of a breath of fresh air. His mind works in very different ways to everyone else’s, and his creator does a good job of explaining those differences without resorting to medical and psychological info dumps. All you need to know about Tom flows through his own consciousness onto the page, with the story told by him, so you see the world through his eyes and are privy to his thoughts.

The plot isn’t overly complex, nor does it need to be. Armstrong’s characters are what carry the story. They’re complex, refreshingly diverse, vividly drawn, and even mostly likeable, with Tom and Emre Bartu taking centre stage. I don’t know if there will be more to come, but if there is, I’m happy to keep my disbelief suspended.