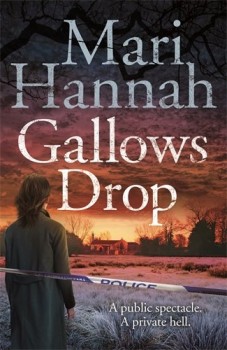 An investigation into a macabre hanging on an ancient gallows thrusts DCI Kate Daniels’ private life firmly into the spotlight.

DCI Kate Daniels is looking forward to a week away from work in the company of psychologist and criminal profiler Jo Soulsby, determined to prove that for once she is prepared to put her private life before the dictates of her job. But the universe doesn’t seem keen to give Kate a break.

When a young man’s body is found hanging from an old gibbet on a desolate stretch of the picturesque Northumberland countryside, fellow DCI James Atkins is given the role of senior investigating officer, but when he can’t be contacted, Kate steps in. There’s bad blood between her and Atkins and has been for a long time. He passes up no opportunity to undermine Kate and her team, but at the same time seems determined to prove his own incompetence. So far as Kate is concerned, delegating the job of interviewing the dead man’s mother is just yet another nail in the coffin of Atkins’ ability to do his job correctly.

The investigation turns more problematic when it becomes clear that Atkins’ daughter Beth could well be a material witness. She knew Elliot Foster and might hold the key to the events that took place in the run-up to Elliot’s death, events that left him beaten almost senseless before he was hung from the old gallows.

Dragging the truth out of a bunch of teenagers, one of whom has several convictions for violence, isn’t an easy task, but Kate is determined to get to the bottom of Elliot’s death. She’s equally determined not to let Atkins get under her skin, but some resolutions are harder to stick to than others. When Atkins launches a vicious personal attack on Kate in front of her own team, the closely-guarded secret of her sexual orientation is laid bare. This, coupled with unexpected revelations about the dead boy, make this case more personal than it’s ever been.

Gallows Drop isn’t an easy read, and Mari Hannah really puts her main character through the mill in this book. Kate is forced to relive painful scenes from her early career, as well as having to stand up to the man whose bullying made her like hell when she was new in the job. But Kate’s no rookie now, and she has no intention of letting Atkins walk all over her, even when he has just potentially thrown a major spanner in the works of her career. Kate has never wanted her private live to be the subject of gossip and speculation, but Atkins has put paid to that.

Her team close ranks around her, and Sergeant Hank Gormley does a very passable impersonation of a mother hen as he clucks around his unlikely chick, doing his best to pour oil on the troubled waters of Kate’s relationship with Jo Soulsby, but it looks like that might be beyond salvaging. Things get more difficult when Kate’s estranged father is added to an already volatile mix by being taken into hospital for a serious heart operation, and despite Jo’s best efforts, it seems like a reconciliation is unlikely.

I felt like something of a voyeur in this book, forced to watch as things just went from bad to worse for Kate, although there were also times when I wanted to shout some sense into her ear. She’s a character I’ve had something of an on-off relationship with over the years, and there were times in Gallows Drop when I felt like things were more about Kate herself than they were about the dead boy. But despite that, the book is tautly-plotted and well-drawn, and the progress of the investigation never seems to lag.

The bleakly beautiful landscape of Northumberland proves the perfect backdrop for this story of tangled relationships, secrets and lies, and Mari Hannah cleverly serves up one hell of a series cliff-hanger in the last line.