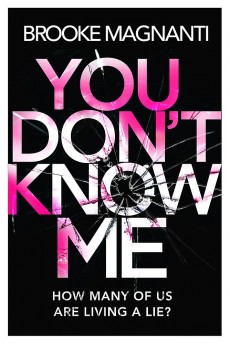 You Don't Know Me

Forensic pathologist Dr Harriet Hitchin has a new challenge when the mummified body of a former call girl ends up on her mortuary slab.

Forensic pathologist Dr Harriet Hitchin is trying to put a somewhat chequered past behind her and is now working in Scotland in the remote Cameron Bridge. Harriet is called in when a mummified body is found in the bins behind a pub. Working alongside Iain, her unconventional mortuary assistant, Harriet does her best to supply the answers the police are looking for, but as the investigation progresses, Harriet begins to realise that her friend Inspector Fiona Kennedy might be barking up the wrong tree.

At the same time, Denise ends up in hospital in Newcastle and the doctors are concerned that she is a possible victim of domestic abuse, something that Denise strenuously denies. But even she can’t totally cover up for her controlling boyfriend Archie, who wants to exercise control over every aspect of Denise’s life. When Denise discovers that an old friend of hers, Miriam Goldstein, has been found dead, she is drawn back to a world she thought she’d left behind as she struggles to understand how her former best friend managed to end up dumped like rubbish behind a pub in the Highlands.

What disturbs Denise the most is the discovery that her friend Miri was working as a call-girl before her death, and she is implicated in a sex scandal with a prominent politician. With the press digging into her friend’s murky past, Denise’s own secrets come under threat.

You Don’t Know Me brings back some of the characters introduced in The Turning Tide, and former call girl blogger and writer Brooke Magnanti, better known as Belle de Jour, makes use of her own experiences when putting together the complex character of Miri Goldstein who is at the heart of this books. Magnanti also puts her PhD in forensic pathology to good use and both strands of the book have the undeniable ring of authenticity. Where she falls down is on the question of point of view, which is the nemesis for many authors. Points of view change from one to the other without warning, occasionally bouncing me out of the narrative in confusion.

Harriet Hitchin isn’t an easy character to write and both she and Fiona Kennedy come over as somewhat colourless and difficult to like. Harriet is struggling with the problem of alcohol addiction and indecision about the state of her relationship with Fiona Kennedy, who’s another character that’s hard to get much of a handle on.

I was delighted when two minor characters from the previous books returned. Rent-a-mob thugs Seminole Billy and Buster are certainly not the usual sort of heavies and add a touch of much-needed colour to a story that is otherwise as bleak and at times as dreary as the Scottish Highlands in winter. The only character who stands out is Denise and although I’m not generally a lover of flashbacks, I enjoyed the gradual reveal of Denise’s past associations with Miri and the way the two storylines inevitably came together.

If Harriet Hitchin and Fiona Kennedy are to appears as series regulars, they could both do with a personality implant. They need more than to be the odd couple in Cameron Bridge. Despite that shortcoming, Magnanti writes with the unmistakable ring of authority and the post-mortem details, although grisly, are as darkly entertaining as anything served up by Patricia Cornwell or Kathy Reichs.