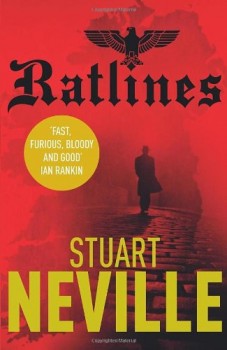 When a murdered German businessman is found in a Galway B&B with a note addressed to former SS paratroop commander Otto Skorzeny pinned to his body, Lieutenant Albert Drake of the Directorate of Intelligence is assigned to find the killer.

In his fourth book, Stuart Neville confirms his position as one the most promising and exciting crime writers by exploring the possibilities of a period of modern history about which most Irishmen know little or nothing – and the politicians and the Catholic church would rather it stayed that way.

The heart of this fast-paced, bloody, tale is how Ireland’s relationship with Britain affected its attitude to the war (which the Irish refer to as The Emergency), Hitler’s Germany – and how they allowed scores of fleeing Nazis or Nazi sympathisers safe harbour.

His hero, G2 intelligence lieutenant Albert Ryan, starts with two strikes against him. A Protestant from strongly Catholic and Republican County Monaghan, he has served as a volunteer in the hated British Army. Now he finds himself pitting his wits against two of the most amoral men in Ireland, the future three times controversial Taoiseach (Prime Minister) Charles Haughey and Obersturmbarnfurher Otto Skorzeny, the brilliant and ruthless Waffen SS officer who led the daring Gran Sasso raid which freed Mussolini from captivity.

When a German ‘businessman’ in found murdered in a Galway B&B – the third to be killed – and with a note for Skorzeny on his body, Ryan is assigned personally by Haughey to find the killer and protect this high profile representative of a regime Ryan fought against.

Both Haughey and Skorzeny were larger than life figures who lend themselves naturally to ‘faction’. High-living racehorse owner Haughey’s career was marked by scandal  – arms deals for the IRA, phone tapping, corruption, embezzlement, tax evasion and a 27-year extra-marital affair. As a young TD (MP) he welcomed Skorzeny at a country club reception in 1957, but in 1963, as Minister of Justice ‘Slippery Charlie’ told the Dail (Irish Parliament) that Skorzeny was never ‘resident’ in Ireland.

Skorzeny’s life was even more remarkable. He was awarded Germany’s highest military honour personally by Hitler, his wartime exploits were followed by a career which saw him cleared on charges as a war criminal, escape from detention, join the Gehlen Organisation, the CIA-backed prototype German intelligence and move to Madrid where he ran the Spanish end of the Odessa network – the ‘ratline’ for Nazi escapers – to Egypt as military adviser to the dictator General Neguib, with a staff made up of former SS officers, who trained Arab and Palestinian volunteers including Yasser Arafat. He cut a deal with the Israeli intelligence service to provide information on ex-Nazi scientists working for the Egyptians on condition his name was removed from Mossad’s list of Nazi war criminals.

Allegedly using hidden Nazi loot, he helped set up Die Spinne, a secret organisation which helped around 600 former SS men escape to Spain and South America, and he travelled frequently between Francoist Spain and Peron’s Argentina, where he was bodyguard and a lover to Eva Peron – Evita.

He visited Ireland in 1957 and 1958, and in 1959 purchased Martinstown House. Refused a residency visa, he had to limit his stays and rarely visited after 1963. The Kildare farm was sold in 1971. He later set up the Paladin Group, ‘an international directorship of strategic assault personnel’, whose clients included BOSS, the South African Bureau of State Security, the Libyan dictator Muammar Gaddafi, the Greek military junta and the Spanish Interior Ministry in their clandestine war against Basque separatists.

If Skorzeny was welcome in Ireland, so were others. Many were collaborators and included Andrija Artukovic, the ‘butcher of the Balkans’ and former interior minister of Croatia, accused of the genocide of up to one million Orthodox Christians, Jews, gypsies and others, who was given safe passage with the help of the Franciscans. The church’s true involvement is still unknown, but there was sympathy for the fugitives because many were Catholic and anti-communist.

This is the shocking background to Neville’s carefully built story, part an attack on Irish complacency, but also a hugely gripping thriller. Set in 1963 in the euphoria surrounding the planned visit of US president John F Kennedy to his ancestral homeland, it is a complex mystery told in exceptional style. A clever plot has double and triple crosses, the Mossad, a mercenary band after hidden Nazi wealth, political duplicity, betrayal and murder as Ryan finds himself in a battle in which there are no good guys and he must struggle to keep himself and the young woman he has met alive.

It’s an absolute blockbuster – and one you won’t want to put down.