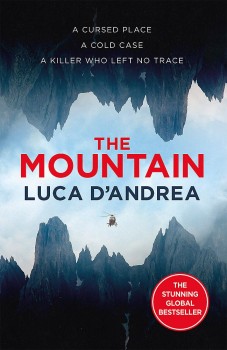 Surviving the crash that he believes was his fault is just the start of Jeremiah Salenger’s nightmares.

Jeremiah Salenger has moved with his wife Annelise and five-year old daughter Clara to north-east Italy. For Annelise it is coming home to her father, to her roots. For their daughter, it is an adventure. For Jeremiah, it is a relatively easy transition after the exhaustion of shooting The Road Crew, a factual series he and his best friend Mike had created and worked on for several years.

But filming is in Jeremiah’s blood. He’s fascinated by the local mountainous terrain and the Dolomite Mountain Rescue Team, and soon he and Mike are filming their next factual series. Then it all goes wrong, and in the wake of a horrific accident where Jeremiah is the sole survivor, the nightmares begin.

Accusations, rumours, guilt and fear all drive Jeremiah to uncover the truth about a 30-year old barbaric multiple murder he has heard whispers about. It is a one-man investigation that puts his entire family in danger and leaves his marriage on the edge of a precipice.  The question that remains is who will survive the truth.

An Italian author writing from the first-person point of view as an American raised an enormous question mark before I even opened the book. I couldn’t work out how two distinct cultures, let alone voice styles were going to marry and sound authentic. In one respect they didn’t. Although brilliantly translated by Howard Curtis, the writing style is still redolent of Italian mountains, of Renaissance intricacy, of poetry. It does not evoke images of a New Yorker, even one with a strong influence from his European background. But I went with the flow, and got stuck in.

My first disappointment with this book was that it starts too far back in the story. The first few chapters ramble on about backstory, which could have been woven more succinctly into later chapters. However, I mentally allowed myself those magical few extra pages before I gave up and reached for something with a bit more action. I am so glad I didn’t throw in the towel. Because although there are several issues that stem from the writing style, it progresses into an intense, senses-driven, atmospheric read.

The pacing is, in places, erratic and non-linear. The rambling is an ongoing theme. But after a while, the reader is so much the protagonist’s shadow that the digressive and flowery introspections merely help put flesh on the bones of a man disturbed by his circumstances. Jeremiah is flawed, and likeable for it. He is obsessive, occasionally violent. He is self-absorbed, often to the detriment of his family. But he is a good man.

Annelise is marginally less well developed, but her behaviour is credible, and again she is a likeable person, despite her occasional ultimatums. Clara is omnipresent. At first, I found her cuteness and amount of time on stage intrusive. But she is a driving force in Jeremiah’s life, and helps the progression of the plot.

The other characters are believable. The author has his readers swinging between liking and disliking them, between pronouncing them guilty and feeling sorry for them.

D’Andrea has portrayed the milieu with rare genius. It is a character with as much breath and life as the other players. And this character swings between benign and evil, between beautiful and hostile. By the end of the book, I had truly taken a journey through a north-east Italian winter. I don’t think I will be going there out of the summer season.

The ending slightly disappoints. While it is credible, there is that pantomime reveal where the baddy is determined to get everything off their chest in excruciating detail. But it is thankfully relatively short.

I could have disliked this book, with its sometimes-gratuitous coloratura and introspections. I didn’t. Because despite the pacing, D’Andrea has found a balance of action and thought that works well. The Mountain is a beautifully written debut and is outstandingly well translated. The scenes are vivid, if sometimes graphic. The plot is exciting, and while not unique, has more twists than an Italian mountain road.