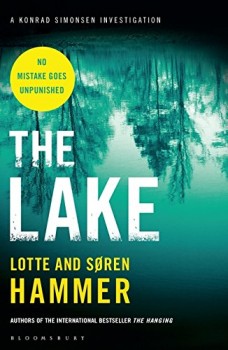 by Lotte and Søren Hammer (translated by Charlotte Barslund)

The remains of a young woman, tied to a stone, are discovered in a lake in the Danish countryside. After fruitless investigation by the local police, the case finds its way to the Copenhagen Homicide Department.

The initial short chapters of The Lake describe in detail how a murder has been committed and by whom. And it’s revolting. But instead of hurling the book across the room I persevered because someone had to do something to investigate this horrendous killing and the circumstances behind even worse treatment of women.

Never mind the background and the skin colour, even though in this particular case all the women are African, brought as ‘au pairs’ to Denmark and literally sold to the highest bidder. Benedicte Lerche-Larsen and her mother run a side business apart from maintaining the main business managed by Benedicte’s parents: making money through prostitution and then laundering it through illegal online gambling Poker Academy. Their empire, based on violence, intimidation and manipulation, doesn’t allow for disobedience which can lead to death.

Back to the murder. The remains of a young woman, tied to a stone, are discovered in a lake deep in the Danish countryside. Her identity is a mystery as no one matching her description has been reported missing. But we know that Benedicte watched as the Nigerian teenager was killed while being punished by Henrik Krag, newly recruited by Jan Podowski, more experienced and vicious, and very resourceful regarding saving money, hiding his tracks and filming the punters. All in the name of money.

After several months of fruitless investigations by the local police, the case finds its way via a media scandal to the Copenhagen Homicide Department. The lack of forensic evidence means it is difficult to make any sense of the crime. The team interview the seemingly perfect Chamberlain, owner of the forest, and the estate bailiff Frode Otto whose history of assaults and accusations of rape make him a prime suspect. Interviews, a painstaking search of the area, wrong questions and dead-end leads eventually lead to the discovery of the human trafficking on industrial scale.

On the opposing side there are the main perpetrators: men who pull strings and men who kill, and beautiful intelligent and ingenious Benedicte, starting a strange romance with illiterate Henrik, developing alongside odd punishments that they both must take. Otherwise their involvement in the murder will become known. A secret coming out cannot be contemplated by the heiress to the criminal empire.

The dynamics within the main group led by Detective Superintendent Konrad Simonsen are brilliant, nuances are sharply observed, and each person has a well-deserved place within the team, especially the Countess, his wife and colleague; sensible Klavs Arnold, from deep Jutland, and even Pauline Berg, emotionally fragile as a result of being kidnapped some time ago. That’s the most enjoyable element of this gripping and powerful procedural in Charlotte Barslund’s translation, which moves at varied speed depending on the emerging evidence or lack of it.

Siblings Lotte and Søren Hammer seamlessly change two points of view: legal and immoral, justice and depravity, police and criminals, and present a dark and extremely unpleasant underbelly of the liberal Danish society, as far from hygge and candles as possible, and where the guilty often don’t get the punishment they deserve.