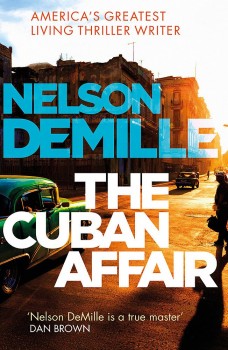 Afghan combat veteran Daniel ‘Mac’ MacCormick, now a charter boat captain, refuses a fishing trip to Cuba, but reconsiders when offered a small fortune and sets sail on his most dangerous cruise.

Nelson DeMille never changes his style or direction and with more than 55 million worldwide sales, why should he? Occasionally he introduces a new character, then builds an action series around them which his followers will love, but is essentially a brilliantly re-jigged repeat of what has gone before.

His latest protagonist is Captain Daniel Graham ‘Mac’ MacCormick, a 35-year-old decorated Army veteran – Silver Star, two Purple Hearts and scars that won’t tan – from two tours in Afghanistan. He lives in Key West and owns a 42-foot charter fishing boat, The Maine, courtesy of a big bank loan he struggles to repay. He is affable and irreverent, the very antithesis of modern PC heroes. His one-man crew, 70-year-old Vietnam infantry veteran Jack Colby, is even more so. A product of his age and background, he has a true 1970s mentality – and an appalling taste in teeshirt messages!

After the beginning of the normalisation of relations between Cuba and the US in 2014, Mac is approached by a Miami lawyer who’s heavily involved with anti-Castro groups and who wants to hire The Maine for a fishing tournament in Cuba. Mac suspects there is more and turns down the job. The price suddenly goes up to $2 million, and Mac agrees to meet the lawyer’s clients – Sara Ortega, a beautiful Cuban-American woman and a mysterious older Cuban exile.

When he is told that the real purpose of the trip is the recovery of more than $60 million hidden by Sara’s banker grandfather when he fled Fidel Castro’s revolution, he must weigh up the chances of returning a rich man – or not returning at all!

From there on, it’s all predictable. Think Pirates of the Caribbean, Confederate gold or Nazi treasure. Remember the old army saying that the ‘best plans fall apart once a shot is fired’ and wait for the twists and betrayals. Then, this being DeMille, there’s the inevitable sex, but that is so clinically American that only trans-Atlantic readers could ever confuse it with love.

In many ways Cuba itself is the star of this book. Beautiful, brutal, warm and charming, repressive and spy-ridden, the country is like its famous classic pre-1959 American cars used as taxis. They may appear beautifully restored relics, but under the bonnet are usually a hotch-potch of scavenged or salvaged parts from other vehicles much like the country where genuine beauty mixes with rotting buildings, disrepair, fear and suspicion.

DeMille did his research on-site and his realistic Cuba-set scenes, plus some jaw-dropping revelations coupled with all too believable supporting characters, cleverly built up tension and fast, precise and genuinely gripping action make this another must-read from a master of the genre. The long, magnificent climactic sequence is a masterful piece of action writing.

It’s brilliantly written with DeMille’s signature humour – not a chapter goes by without the sarcastic, cynical, black, but sometimes genuinely funny realism of those who have received their baptism of fire – fascinating authenticity from his research trip and the usual heart-pounding pace.

If there is a weakness, it’s the ending, which may leave you a bit nonplussed and unfulfilled. But perhaps that it is an indication that deMille enjoyed this story so much that we may well see Mac and Sara return as stars of a new series.