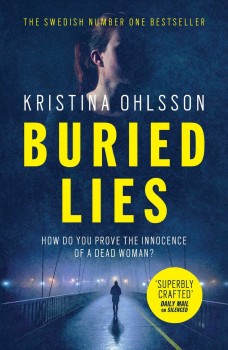 Stockholm lawyer Martin Benner is visited by the brother of a woman accused of five murders, now dead, insisting that the case against her was flawed.

Sara Tell confesses to five killings in two countries but leaps off a bridge to her death before trial, a cause celebre. Her young son has disappeared. So when her brother Bobby turns up six months later in lawyer Martin Benner’s office seeking a re-opening of the case, Benner is intrigued and after finding some apparent weaknesses in the accusations, decides to look into the matter more closely.

Benner meets several people in contact with Sara before her death and becomes convinced that much of the case against her is inexplicable. Of the five deaths for which Sara is held responsible, two were in Texas and three in Sweden. Jenny, a friend of Sara’s from the US, surfaces and fills in more of the background.

Most of the story is narrated by Benner in the first person, interrupted every few chapters by a transcript of an interview between Benner and a journalist. This highlights unusual facets of the case and it is evident from a few pages in that either Sara was telling the truth (something that revelations show to be increasingly unlikely) or she was the victim of a very devilish conspiracy.

Benner seems slow to appreciate both the above and the risk to which he is exposing not just himself, but also his legal partner Lucy and his niece Belle, who he has adopted since the death of his sister in a plane crash. Benner starts the book as smug and cocky and less than agreeable, in an ‘open’ relationship with Lucy which he regards as carte blanche to have sex with any woman he meets.

Whether it was the less-than-sympathetic central character, some minor problems with the translation or just the fantastically detailed plot, I found the book wearing before the final pages. The idea that a Swede would get a US visa in 24 hours was only one of the problems I had with the narrative. It’s Scandi noir with a difference: no snow but plenty of angst, as Benner gets slowly dragged deeper and deeper into something that seems to get ever less explicable as time goes on. Even at the end only part of the puzzle is sorted: ‘Sara was the first act. Now the second act is about to start, and I’ve got the lead role...’ No doubt a sequel is on its way.