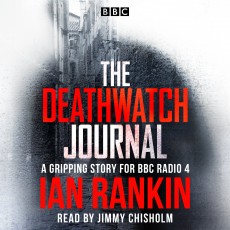 A man awaits death in Edinburgh’s Saughton Prison, but the guard who is tasked with keeping the death watch with him is not convinced of his guilt.

Thomas Scott is a guard in Edinburgh’s Saughton Prison. The year is 1962 and capital punishment has not yet been abolished. One of Scott’s jobs is to watch over the prisoners who are awaiting death, and to record his observations in a journal.

Many of the men on the death watch protest their innocence, and in the case of William Telfer, he’s certainly guilty of a lot of things, just not necessarily the crime for which he will shortly be hanged. Telfer has been sentenced to death for the murder of his wife, but although their relationship was clearly volatile, Telfer denied the killing and claimed he was in Jimmy Braden’s pub at the time of the murder. But the problem for Telfer’s defence was the fact that none of the regulars remembered seeing him, and so his alibi was disregarded at the trial.

As the death watch progresses, Scott becomes ever more certain that an innocent man is going to the gallows for a crime he didn’t commit, and that even with his impressive list of other crimes, Telfer still deserves justice. Scott’s own marriage is in difficulties, which in some ways makes him want to get to the truth about the killing even more, as he makes a series of excuses to his wife for his frequent absences. His quest for the truth takes him deep into the dark side of the city.

Scott’s suspicions are aroused even further when a conversation with Mr Turpin, the hangman, appears to be warning him off his attempt to see justice is properly served, because if Telfer didn’t kill his wife, then someone else did. But the police are not keen to see Telfer’s case reopened, either, and warnings come thick and fast.

The Deathwatch Journal, written by Ian Rankin as an original story for BBC Radio 4, is narrated by Jimmy Chisholm, who handles a variety of mainly dour voices with considerable aplomb. The story is relatively simple, although not without its twists, as expected from the master of Scottish noir. I quickly became engrossed in Telfer’s story, and it stands as a salutary warning to anyone who believes in the return of the death penalty. Nothing is ever as simple as it might seem, including this tale.