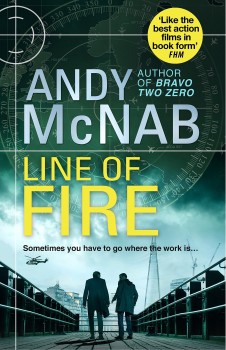 Nick Stone is operating on home soil for a change. He has to find a woman, snatch her and deliver her to the shadowy operator he knows as the Owl.

Nick Stone isn’t used to working with a team any more, but after his recent trip to the Arctic, he’s forced to work with others to ensure his own survival. The four of them each has a memory stick containing a record of events that several governments don’t want in the public domain. The threat of exposure isn’t enough, though, and Stone strikes a bargain with the shadowy figure nicknamed the Owl. They must find a woman and bring her to the Owl alive.

On the face of it, it’s a simple enough task. They know what the woman looks like and where they can find her. The only problem is Nick thinks there’s a traitor on the team, someone who’ll sell them out to the Owl. Prime suspect is Jack who’s lost most of his money on a classic scam, where he’s met a woman online and ended up sending her money. A lot of money. That puts him firmly in the frame.

They find the woman in Cornwall, but the snatch turns more complicated than they could have imagined. She’s a world-class hacker, protected by a bunch of ex-military heavies. Nick’s team are all ex-soldiers too, and aren’t willing to stand by and let the security of their own country be compromised.

Line of Fire is less all-out action and in places more techno-thriller than Andy McNab usually serves up, but an outing for ex-SAS covert operator Nick Stone is never dull. Stone is on the back foot at the moment. He can’t access any of his money due to a long-drawn out legal wrangle following the murder of his wife and son and he’s running out of credit with his Swiss bank. Unlike the mismatched bunch of ex-servicemen he got to know on the walking trip to the North Pole, he’s not damaged in body, but he’s certainly taken a battering mentally.

Stone’s latest outing has the stamp of authenticity that all McNab’s books carry. My only problem lay in the fact that even having read the previous book, Cold Blood, I was still fairly bemused by the first section of the book, as information is drip-fed very slowly, and for a while I didn’t know and couldn’t remember who the Owl was or why the memory sticks the team were all at such pains to keep hidden were so important. A bit more show or even tell earlier on would have eased the transition between the two books.

Once everything had come clear again, I was thoroughly caught up in Stone’s attempts to stay one jump ahead of the game, find the traitor, and earn some much-needed cash. Seeing Stone operate on home soil again was interesting, especially when the action takes him and the team to my home city of Bristol. I wonder if we’ll be seeing more of Rio, Jack and Gabe in future. I certainly wouldn’t mind if we did.