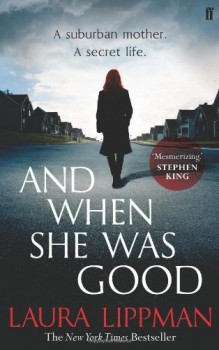 And When She Was Good

Helen’s childhood with a violent father leads her into a life with many risks.  When a so-called suburban madam in a neighbouring county is found murdered and other signs of danger appear, Helen realises that she needs to make some changes to her life, but can she?

Helen grew up in a household with a violent father who constantly criticised and controlled her. He forced her to leave education before gaining any qualifications, although he did not destroy her love of history and literature.  Helen was bright but with little or no self-esteem by the time she left home. As a result she fell into a series of unsavoury and dangerous relationships.

Her final partner, Val, is eventually imprisoned for a murder to which Helen is a witness. This leaves Helen free to take over the running of his business, the one she worked for before Val was caught.

Helen runs it under his direction from prison. In order to protect her young son, Helen markets the business as a firm of lobbyists. Helen, now Heloise, successfully manages to keep the various aspects of her life in separate compartments until things start to go wrong.  Her decision to get out of the business has dire consequences but she doesn’t give up hope of escape.

It is difficult to pigeonhole this book. It is definitely not romantic, nor does it have a neat plot or crime to solve. The subject matter is gritty but nevertheless it is interesting to follow Heloise’s thoughts and her progress. The best description for the book would be psychological thriller in that the whole situation which initially is so controlled gradually disintegrates into a violent climax.

However the book does not create a particularly intense feeling of fear at any point. It is a shame that the the reader seems to have been left as a disinterested outside observer. More perhaps might have been done to engender more involvement and to address the readers’ emotions more.  What the book does do well, however, is to create a feeling of inevitability and hopelessness in places.

Laura Lippman shows very good empathy with the main character – definitely a hopeful view that life can be turned around by intelligence and determination for self-improvement. Whether or not this is the purpose of the book is open to question. It is certainly well written. The thought processes are clear and the feelings of the main character are laid bare. Other characters are carefully constructed and believable. The dialogue is realistic and fluent, not forced in any way. The order of the chapters mixes the on-going story with the background, maintaining a good pace.

Overall, And When She Was Good is an interesting and unusual book. It makes a change to read such a well-researched story based on the seamier side of life.