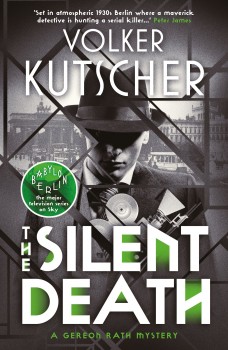 It is March 1930 in Berlin and silent movie actress Betty Winter is killed when a lighting system falls on her. Inspector Gereon Rath is determined to find out the cause.

This novel by Volker Kutscher follows on directly from Babylon Berlin, which introduced Gereon Rath, a Berlin police inspector working in Homicide. Whilst that novel was redolent of the last years of the Weimar Republic, this one is less so. It is as if, having very successfully established the atmosphere in the first novel, the author saw no necessity to do so again. There are references to Reds and Brown Shirts, as well as to the funeral of Horst Wessel, but they contribute little or nothing to the feel of the period.

What we have instead is a plot initially based on the decline of the silent film, the coming of talkies and the resulting corporate competitiveness. The word ‘initially’ is important in any review of this novel because, after appearing to be based on the rivalry between different film companies, the plot drifts off into many different directions and has a number of sub-plots.

There is one, for example that involves Rath’s altercation with another detective in Homicide and has nothing whatsoever to do with the main topic. Another involves a dog and is equally irrelevant. It is one of those books in which the reader may be tempted to look at the back to see how long it is and may be rather depressed to find that it is in excess of 500 pages. It is almost as if the author had determined in advance that this was to be a long novel and had to find additional themes to pad out the main story.

The one topic always present is the uneasy relationship between Rath and his superiors. In the first novel we learn that Rath had left the Cologne police service to come to Berlin – an arrangement that had been made possible by his father who was a high-ranking police officer in Cologne. It had been the intention that he would make a new start in Berlin but he doesn’t seem to have learned from his previous experience.

He dislikes his immediate superior, Böhm, is insubordinate and is quite prepared to undertake outside work, almost as a private detective, because he feels it may advance his career. He appears to curry favour with the big brass and one has to wonder how long he would have kept his job in the real world. Apparently he is to do so, however, because the publishers have hinted that there will be other books featuring him. If so, it is to be hoped that they will be a little less lengthy. This could be partly achieved by the removal of his on/off romance with Charley, which began in Babylon Berlin, appeared to end there, but was then resurrected.

The plot itself is cumbersome, repetitive and at times almost indecipherable. There is a long and highly technical description of the way in which Betty Smith met her death that may leave many readers quite bewildered. There is an unnamed, apparently insane mystery man to whom a number of chapters are devoted which appear to lead precisely nowhere. When the denouement does finally arrive it leaves many questions which, one suspects, would not be answered even on a second reading. All in all, this is a very disappointing sequel.