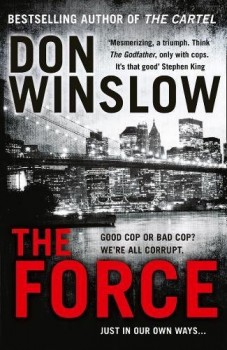 Detective Sergeant Danny Malone leads an elite unit fighting drugs, guns and gangs in Manhattan at the heart of a criminal justice system riddled with corruption, cronyism and lies.

The most shocking thing about Don Winslow’s latest sprawling, ugly, bloodstained epic is its three-page dedications. This panoramic overview of a criminal justice system rotten with corruption and cronyism lists the names of the 179 American law enforcement officers killed on duty in the time it took the author to produce what is a shockingly convincing and breathtaking story which has all the visceral impact of a Shakespearian tragedy.

Male and female, whites, blacks, Hispanics and Chinese – every rank from Chiefs of Police to Correctional Officers – gave their lives in the unending battle against organised multi-national crime whose tentacles stretch into every part of society.

Think The Sopranos or The Godfather – only with cops! This mesmerising story of greed and violence, loyalty and betrayal, retribution and redemption is unfailingly human in its tragic details.

All Denny Malone ever wanted to be is a good cop, like his father. He’s the uncrowned ‘king’ of Manhattan North, an NYPD detective sergeant and leader of ‘Da Force’, the smartest, the toughest, and baddest police elite unit fighting drugs, guns and gangs. Malone and his partners exact their own retribution, rather than chance the corrupt system and the bribeable courts. They have stolen millions of dollars in drugs and cash. Trapped by the FBI, he battles to survive while the city teeters on the brink of a racial conflagration over the shooting death of another black man by police.

This is a convincing portrait of a courageous, heroic and deeply flawed man, a masterpiece of urban realism and societal comment which charts the often strained relationship in post-9/11 America between the police and the society they serve. It could almost be a piece of factual journalism, giving recognisable faces and big hearts to the men who hold the thin blue line – and break the rules.

Winslow doesn’t lecture – he shows us the dirty money, ruined lives and blood in the gutter, an all-embracing horrific education in the reality of urban policing and it is convincingly done without any of the politically correct navel-gazing of so many ‘literary’ novels. You will almost end up hoping that somehow Malone will escape his inevitable fate even though you know he has crossed every acceptable line of behaviour and law in the most unacceptable kind of way.

Winslow’s characters leap off the page full of New York brashness, ambition and cynicism. The streets of Harlem and North Manhattan spring to life, charted with a tangible atmosphere and rejecting their romanticised or sanitised aspects. The ‘Projects’ are powder kegs, where any household can include perpetrator and victim, citizen and criminal – all those sometimes in the shape of one person!

The theme of police gone bad is hardly new, but the rage and anger with which Winslow tackles the subject stands out. Malone and the other members of ‘Da Force’ are great characters, well constructed and sympathetically written, but they serve only to focus attention on the wider story.

The constant political battles between the Police Commissioner and the Mayor; the yawning divisions and dislike of the law enforcement agencies; the corrupt and overcomplicated legal system; the phony, often religious, ‘community leaders’; the property billionaire who launders drugs money to finance his projects – all underline the failings of modern American society. But while you’re reading, all you will care about is Malone’s personal implosion!

This fast-moving and brilliantly written masterpiece of loyalty, betrayal and human tragedy, the best cop book since The Choir Boys, storms to what is a bloody, dystopian and shocking climax – but its message remains: life does matter, whether it’s black, white, or any other colour, including blue! It’s hardly a surprise to hear that film rights have already been taken up, like many others of Winslow’s previous stories. How even the best director will be able to capture this dark, morally complex dissection of American society on celluloid, I can’t imagine, but if it’s anything like the book, it will make uncomfortable and compelling cinema – and win a shed-load of Oscars!