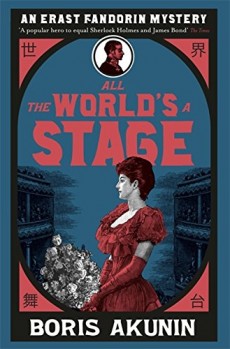 All the World's a Stage

A friend asks Erast Fandorin to look into apparent threats to Moscow’s favourite artiste, a talented and beautiful actress, but the detective compromises his quest by falling in love with her.

If you’ve not come across London-based Russian Boris Akunin before, you’ll be in for a real culture shock. His impossibly heroic and chivalrous detective Erast Petrovich Fandorin – this is the 11th in the series– is truly a Russian Holmes, but with a touch of both Sir Galahad and James Bond.

Part of Akunin’s success is undoubtedly down to his translator Andrew Bromfield, who magnificently captures the highs and lows of the Russian psyche, its peaks of elation and depression, practicality, cunning and wild romanticism in sympathetic and literary English. But Akunin, real name Grigory Chkhartishvili, has to provide him with the material, which he does in ever-changing, but always witty, ingenious and entertaining style.

Each of the previous books since his debut with The Winter Queen has tapped a different crime genre. Among them we’ve had a conspiracy murder, a spy thriller, a closed-room mystery and now a theatrical mystery which is rumoured to be the penultimate in the Fandorin saga. If this is so his nonpareil of detection will be sadly missed. Fandorin, deeply affected by Japanese culture, has devoted his life to the pursuit of self-harmony.

While his formidable intelligence and athleticism have been applied to shooting, sword play, unarmed combat and odd skills such as tightrope walking, plus absorbing many languages and cultures, he has also adjusted his spiritual life, to some minor extent exchanging physical strength for inner stability as he ages.

By 1911 he is in his mid-50s and can clearly see the approaching crisis which will tear both Russia and Europe apart. But Russian society chooses to ignore the growing clouds in a shower of champagne bubbles and artistic excesses. Fandorin is contacted by his friend, Chekhov’s widow, who is concerned by a confession she has heard from Eliza Altairsky-Lointaine, the toast of Moscow, a beautiful actress with an increasingly infamous theatre troupe.

Her life is as colourful as the parts she plays. Pursued by a succession of suitors, she is the estranged wife of a descendant of Genghis Khan. Her husband has threatened to kill anyone who courts her and when a poisonous snake is found in a bouquet she receives on stage, he appears to be fulfilling that promise. Fandorin goes to watch the actress for the first time – and falls desperately in love.

This mid-life crisis – his previous love affairs both ended tragically – sees him lose his confidence and doubt his own razor-sharp mind as he wonders if he should love again or if his love might be returned. His internal struggle with his emotions only serves to make him realise perfection is impossible and that he is only human.

All this is set against a background of a series of murders inspired by – and related to – the beautiful and talented Eliza and her company of artistes. A witty pastiche of life behind the stage curtain, the petty jealousies and competition among the players as well as their sense of camaraderie, make the story vivid and a score of red herrings and plot twists will keep readers guessing.

The story is clever, the writing and translation brilliant. And there’s an added bonus. As Fandorin attempts to stay close to Eliza, he writes a play for the company. Added as an appendix, the text is in the style of Zeami, the originator of the dramatic art form of Noh theatre.

Zeami, who also wrote Kadensho, the classic book on Japanese dramatic theory, uses images of nature as a constant metaphor. Snow in a silver bowl is said to represent the ‘Flower of Tranquillity’. The frequently mentioned Y?gen is a ‘profound, mysterious sense of the beauty of the universe – and the sad beauty of human suffering’ and also used to refer to Zeami’s interpretation of ‘refined elegance’ in a performance of Noh.

This touching, tragic and exquisitely written parable offers parallels to the action and love interest of the story and serves as an alternative commentary on it.