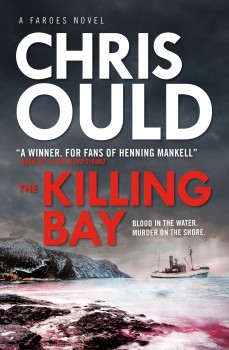 A body of a woman is found following the clash between international activists and local fishermen on the Faroe Islands. Detective Hjalti Hentze wants to find out if there is a connection between the murder and the slaughter of whales.

A group of international activists from the Atlantic Wildlife Conservation Alliance (AWCA) arrive on the Faroe Islands with one aim: to shame the locals and to stop the traditional whale hunts, called grind. The main protestors have no qualms about voicing and sharing their opinions to the entire world so no wonder that tensions run high even before the bloody event takes place in the waters by the beach. Among the protesters the photographer Erla Siversten seems quite sensible, professional and objective. Later it becomes clear that she understood the meaning of grind, being Faroese herself and following her upbringing on the islands.

Hours after the violent confrontation a shocking discovery is made. A body of a woman is found away from the port and the actual place where the enormous mammals had been slaughtered.  The victim has been viciously attacked and left exposed near the building with the freshly painted slogan ‘F… the whales’ which could only suggest the aftermath of the protests. However, the police decide not to link these two events straight away to avoid antagonising locals and visitors.

Local detective Hjalti Hentze starts investigating the circumstances surrounding the murder of the victim who turns out to be Erla. He soon loses his trademark calm and becomes more anxious when some evidence is found in the boat shed belonging to his son-in-law Finn. He interviews members of AWCA, the photographer’s friends, tries to remove himself from the case, and explains the situation to his daughter, furious that her husband is the main suspect. Then his superiors feel reluctant to share information, the forensic samples go missing en route to Copenhagen, and Danish police get involved.

British detective Jan Reyna, the other main character introduced in the first book The Blood Strand, remains in the background most of the time. He’s preoccupied with finding out more about his Faroese roots. While staying with his cousin Frida he searches for any information about his mother Lydia who had killed herself years ago, and is also concerned that depression is taking hold of him again, as he awaits his professional fate, suspended from work.

The Killing Bay comes second in the trilogy set in the Faeroes but can be read as a standalone. Chris Ould’s passion and understanding for the place, spread out over 18 islands in the middle of the Atlantic, shines throughout, as does his excellent exploration of the relationships between locals and those who come to visit. It’s good to see that the focus is shifted more to the Faroese and it’s an interesting development to make the place appear more familiar, yet still so intriguing, full of unique nature, and bleak but fascinating. The pace of this compelling story moves with the rhythm of the life of the islands and their inhabitants: without too much rush, yet determined and uncovering only certain secrets.

Especially good is the dynamics between Hjalti and Jan.  I particularly like Hjalti with his dry sense of humour, guided by ‘the old policeman’s maxim: never pass up the chance for the toilet, a coffee or something to eat’, and sensitive enough to apologise to dead Erla for taking photos of her: ‘I’m sorry. It’s my job’. He’s a wonderful guy.