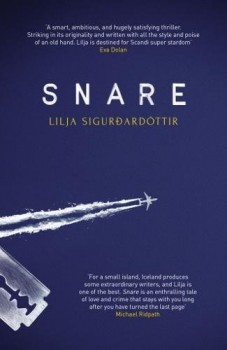 Sonja survives on a cocktail of cocaine smuggling and love for her young son. She's desperate to escape drug barons’ snare and to win full custody of Tomas, so must become more daring and entrepreneurial. But things are getting dangerous.

Winter 2010. Attractive, independent and immaculately dressed businesswoman Sonja, owner of a thriving IT company, frequently travels abroad, mostly to London and Copenhagen. She’s cool and collected, with a film start quality, and her appearances at Keflavik Airport bring some sense of calm to all those who see her. But it’s a sham.

Back in her shabby flat she desperately misses her young son Tomas and is overwhelmed by guilt of failure as a mother, magnified by her own sexuality. Over two years ago her husband Adam, a high-flying bank executive, walked on her to be with Agla, his own colleague from work, and since then has made her life hell, and of course got custody of Tomas.

Underneath the unruffled exterior Sonja lives on a dangerous cocktail of dread and occasional adrenalin rush when she manages to bring another load of cocaine from abroad. Her fear has nothing to do with flying, and everything to do with the trap into which she inadvertently walked following an extremely messy divorce. She had hoped to get legal advice from apparently friendly lawyer Thorgeir, but instead she has been pulled into helping him to carry small quantities of the drug across the borders.

There is simply no escape. Now constantly watched by assorted thugs, her only respite is saving money for the custody battle looming ahead to spend more time with Tomas, the only thing worth living for. She devises increasingly elaborate methods to smuggle even more cocaine, and also frantically plans how to free herself from the snare which is constantly tightening its teeth around her.

However, although she never makes a wrong move, she somehow attracts the attention of Bragi, a customs officer, who is close to retirement yet still determined to monitor and patrol all those who enter the country. He decides to follow his instincts, partly because of his sense of duty and natural curiosity, partly because his own life became painfully empty after his wife Valdis had to be moved to a nursing home. Bragi is sharp and methodical and he soon recognises patterns and connects faces and names. While he conducts his own private investigation, he realises that the elegant drug mule has no choice.

Sonja’s situation is strained by on-off relationship with Agla, the former head of investment who is currently being prosecuted in the aftermath of financial disaster. Agla’s overwhelming sense of shame relates only to her emotional and sexual turmoil, and attraction to a woman, yet is nearly non-existent when it comes to the monetary dealings, putting the individuals on the chopping block and gambling away the country’s finances.

Driven by conflicting emotions and desires Sonja, Agla and Bragi are thrust together into a scenario that doesn’t seem to have a clear-cut ending but keeps the tension up. The Icelandic author and playwright Lilja Sigurðardóttir delivers a sparkling firework of a novel, tightly-plotted, fast-paced, and crackling with tension, surprises and vibrancy. The cat-and-mouse chase starts on the very first page and refuses to slow down even if her unforgettable protagonist tries to extract herself from the dangerous criminal world.

It’s a well-chosen setting of crumbling economically and morally, with Iceland’s capital still reeling from a financial crash and a volcanic eruption few months earlier. Sigurðardóttir is a sensual, passionate writer, her exciting style brilliantly conveyed in a smooth translation by Quentin Bates. If the first glamorous instalment of the Reykjavik trilogy is just a starter, then I cannot wait for the rest of feast to be finally available in English, to be devoured by English readers.