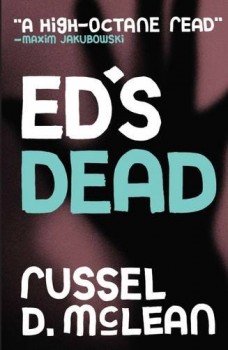 Jen is a failed writer, but she’s just about to become famous for being the most dangerous woman in Scotland.

Jen Carter has had enough of her waste-of-space boyfriend, Ed, but she only wanted him out of her life, not off the planet. When she kills him by accident, her first thought is to tell the police. Her second thought is to contact one of Ed’s friends to help her sort out the horrific mess. She goes with her second thought, and embarks on an increasingly dark journey where she must play cat-and-mouse with the hitman sent to recover Ed’s cache of drugs and money. But as the body-count of accidental deaths mounts, with Jen implicated in each of them, she is soon on the run from criminals, police and the media. She is running out of places to hide.

Written in the first person, present tense, Ed’s Dead should be a story that connects and suspends disbelief. Unfortunately, the plot is so far-fetched, with its plethora of bad decisions and ‘accidental’ killings, that if I had to choose between believing this book or Father Christmas landing on my hearth, my money would be on Santa. While I appreciate that one bad decision can have a devastating domino effect, this just went too far.

So, although I enjoyed the early part of this book, and loved the idea of a journey with someone who had accidentally killed an ex-boyfriend, it went downhill fairly fast. It didn’t help that the main character was not particularly likeable. I am the first to prefer flawed characters to little-miss-perfects, but Jen Carter just comes across as being stupid. For me, none of the characters particularly leapt off the page.

I felt slightly conned by the opening of this story. It starts with Jen remembering it is the second anniversary of her friend’s disappearance. The reality is, the disappearance has little to do with the plot, and I would put it in the same category as those stories that start with a dream or those which have a gun that no one ever fires; a means of drawing the reader in under false pretences.

The writing style is easy to read, and the plot moves at a fast pace. However, this is due to action, not introspective edginess. For Tartan Noir it is more kilt-crime, not sporran-suspense! Moreover, Ed’s Dead has more than its fair share of conveniences, and I cannot believe one disorganised woman out of her comfort zone could wreak so much havoc without getting caught sooner. But despite that, Ed’s Dead is a quick, gritty read, from an author with a confident voice.