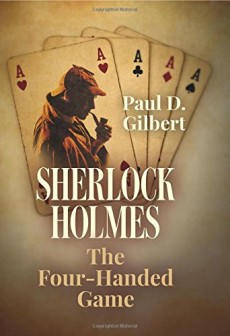 The robbery of a gold mandolin, an assault on a young actress and a violent murder bearing the hallmarks of Jack the Ripper would seem entirely disconnected to all but Sherlock Holmes.

There is no respite for Sherlock Holmes and Dr Watson after their recent adventures in Egypt and Italy. Before they have even had time to recover from solving their last case, Holmes is offering his advice and insight to new and extremely worried clients.

John Harden, the first to arrive at 221b Baker Street, is clearly troubled by the unfathomable disappearance and reappearance of objects in his house. Worse, Harden is sure he is being intimidated by fellow train passengers every morning. It’s never the same person twice and for now, their intimidation has been subtle and controlled. But even before things escalate, Holmes knows there are anomalies in Harden’s story.

Denbigh Grey, Holmes’ next visitor, is far more an open book. A poorer man than Harden, and from a different walk of life, his worries are a puzzling mixture of generosity and bullying. Offered, for him, a vast sum of money for some translation, he had felt gratitude for the work. This was until he not only sensed an underlying aggression from his generous yet mysterious employer, but also fell upon abnormalities in the text he was translating. Now Holmes fears for the diminutive man’s life.

But soon more mysterious crimes distract Holmes from breaking the code he is sure lies in the translator’s text inconsistencies; crimes that will put Holmes and Watson’s lives in danger.

Sherlock and I go back a long way. He was my childhood hero. However, as times moved on and writing styles changed, I decided to not revisit his books, simply leaving them as fond memories. So, it was with mixed feelings that I opened a shiny new Sherlock Holmes mystery. I was under no illusions; this was not a manuscript suddenly unearthed after decades languishing in an attic. Having not read any of the author’s previous Holme’s novels, I was not sure if the style would be similar. The only thing of which I was certain was that Holmes would undoubtedly sniff out clues that no one else would spot.

As with Conan Doyle’s stories, Paul D Gilbert has written this novel in the first person past tense, from Dr Watson’s point of view. He has clearly studied the relationship between Holmes and Watson in great depth, along with their characters and the milieu. And he has recaptured those aspects extremely well. Equally so, Gilbert has put together a complex case for our intrepid duo to crack.

However, there are points of writing style and content that increasingly irritated me. Conan Doyle, if my memory serves me well, made full use of Latinate and flowery words. Gilbert has reproduced this writing style, which at the start was the icing on the cake. But the further I delved into the book, the more an incongruency stood out. In Conan Doyle’s era, it would have been unheard of to put prepositions at the end of the sentence. As Gilbert has shadowed the rest of Doyle’s writing style, this grated on me as hard as an artist closely reproducing the Mona Lisa, but with felt-tipped colouring pens. In any other book, I would not worry about this outdated grammatical rule. But here, it is a disappointment in the detail.

Although there is plenty of action and case-solving in The Four-Handed Game, there is also a fair amount of ‘delayed gratification’. Any fan of Holmes will know that often he is unwilling to let the proverbial cat out of the bag before it has fully grown. And those fans will also know that this is often to the frustration of his sidekick. However, the prevaricating and long-winded is-he-isn’t-he sentences immediately before revelation is overdone. Perhaps it is deliberate, to make the story longer. For me, it slowed the pacing.

The first chapter did little to impress me. It was 100 per cent tell, and left me distanced from the characters, despite being written in the first person. Although it helped set the scene for the story, I am sure it could have been significantly condensed.

With a large cast in this relatively short book, I found some of the names too similar to one another, and slightly confusing. Of course, some of the names are from the original Homes’ stories, and unchangeable. But it would be pleasing to have more distinction.

Despite my reservations, the overall impression I had as I closed this good romp with a childhood hero was that Gilbert has brought Sherlock back to life, with a believable reproduction of dialogue, behaviour and action. And other than the first chapter, his ability to create atmosphere is an excellent reproduction of Doyle’s undeniable talent.