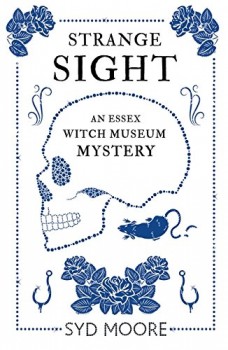 Ghostly sightings, mysterious writing and blood flowing from a chandelier lead up to the murder of a chef in an upmarket London restaurant.

La Fleur, an upmarket new restaurant, is built on a site with a lot of history. It lies off Fetter Lane between Fleet Street and Holborn. It looks like some of that past is leaking into the present with ghostly noises, sightings and manifestations of flowing blood and spectral writing. This, plus a few rats and an outbreak of food poisoning, is enough for the owner, East End gangster Ray Boundersby, to call in Rosie Strange, who has recently inherited a Witchcraft Museum. Rosie is sceptical, but with Sam Stone, also inherited with the museum, sets off to at least ask some questions. But when they get to the restaurant they find an active crime scene where the head chef has been brutally murdered.

This is not Rosie's preferred milieu (she's a fraud investigator by trade) but there's enough to interest her in the testimony of the witnesses to make her want to dig further. And besides, Boundersby threatened physical harm if they didn't, although she's almost certain he's joking. Almost.

Rosie's nose for investigation and Sam's sympathetic interviewing techniques mean that they quickly dig into the circumstances surrounding the ghost sightings. Although they're there for the ghosts, they quickly get insight into the murder and other non-supernatural crimes, because there is far more going on in the La Fleur than the pursuit of a Michelin star.

I like Rosie. She's an Essex girl from the tips of her manicured fingers to the soles of her blingy gold boots and that comes with determination and the nose for when someone's trying to pull the wool over her eyes. She is also gamely dealing with inheriting a museum of witchcraft, with not unattractive manager, Sam, as well as something of a family mystery. It may be that she has hidden talents that make her more suited to this supernatural career than she originally thought.

I enjoyed this book, the second in the series. The mystery isn't deep, but there is fun to be had in working out which bits of the supernatural set dressing are fake and which are real. And of course, in a supernatural series, not everything can be explained in terms that the Metropolitan Police could rely on in a court of law. Rosie is an entertaining and intelligent protagonist and, although the mystery is solved in a cliched set piece, I would like to spend more time in her company.