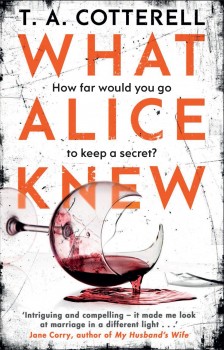 Alice and Ed have a wonderful life, but when Ed doesn’t come home one night after attending a party, strange things start to happen. In searching for the truth of what really took place that night, Alice risks her family and her way of life.

Alice and Ed Sheahan seem to lead a charmed life - she, a well-respected society portrait painter and he, a top obstetrics consultant. They live in a lovely part of Clifton in Bristol, and have two children, Nell and Arthur.

The book opens with Alice painting a portrait, and we get a glimpse of what it might be like to do this - not just daubing paint on a canvas, but trying to understand the sitter, and capture their essence in the portrait. Indeed, there are artistic references throughout this book, helping the reader to understand how Alice thinks; the reader learns that truth is an essential tenet of her professional life.

Alice discovers that her husband did not come home one night, when Nell has been left in charge of Arthur. When she sees Ed the next morning, he is nursing a bruising hangover, and, as someone who normally doesn’t drink very much, is at a loss to explain his unusual behaviour. Then strange things start to happen - flowers are delivered to the door from an unknown person, and Ed is no longer the cool, relaxed person he used to be.

Eventually he confesses to a crime which took place on the morning after the party; he says it was an accident. Alice decides to support him and they weave a conspiracy of lies. The police soon take an interest in the couple, particularly Phillips, a detective and a throwback to the 1970s copper, complete with moustache and dodgy jacket, who is more tenacious than the rest. Alice finds it much more difficult to live this deceitful life than Ed, who seems relaxed and happy.

Alice’s paranoia develops slowly and is fed by an unexpected encounter with an old friend from whom she parted on very bad terms. She also discovers a family secret which devastates her. Meanwhile, Ed appears to have come to terms with what happened, and he became a less likeable character.

This book is as much about truth, trust and marriage as it is a thriller. There are many twists and turns, which keep the pages turning, but the ending did not seem consistent with the characters as they had developed in the book.