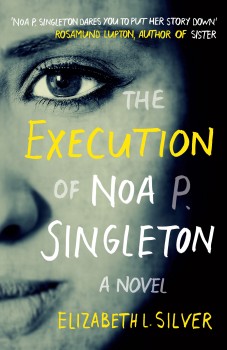 The Execution of Noa P. Singleton

A woman is on death row awaiting execution for murder is visited by a young British lawyer to assemble a final plea for clemency.

Noa P Singleton has spent ten years in the Pennsylvania Institute for Women, going through lengthy appeals against a death sentence for murder. Six months before the date set for execution, a young British lawyer Oliver visits to prepare a final appeal for clemency. He is accompanied by his boss, Marlene Dixon, who runs ‘Mothers Against Death’ and who is also the mother of Sarah, for whose murder Noa was convicted.

Noa is clearly a bright woman, but responds cynically to Oliver’s attempts to draw her out, and it becomes clear that she seeks and expects neither exoneration nor commutation of her sentence. As the book progresses, we learn Noa’s sad history, the circumstances which led up to the crime for which she was sentenced, and why the true facts have never seen the light of day.

According to the back cover blurb, author Elizabeth L Silver studied capital punishment at law school and did research at the Texas School of Criminal Appeals. Presumably the failure of the criminal process detailed in Noa’s case is a realistic picture of what can happen in the USA when you have police uninterested in the truth beyond what is necessary to secure a conviction, poor legal defence and a defendant unwilling or unable to speak out on his or her own behalf.

Beneath the legal framework Silver unfolds a  tragedy of two dysfunctional families in modern-day America, brought into contact by chance, and with apparent inevitability sliding into a traumatic conflict. Both families are educated and with intelligence, but exhibit behaviour dominated by self-interest and indifference to the feelings of others. As a result the book is very black in tone, and the humour only of the darkest kind.

Key to the events portrayed, and the strongest character in the book, is Marlene. She is a highly-qualified lawyer of some social standing and cannot accept her daughter Sarah as she is in reality, and postulates a better version, which she seeks to animate by manipulation where necessary. The book is punctuated with her letters to Sarah, now dead, and as the tale is revealed the dissonance between Marlene’s construct and the real Sarah become more and more apparent.

This is primarily Noa’s tale, however, essentially told by her in the first person. Her adolescent sneer and rejection of meaningful contact with others is initially rather wearing. But it is she who has suffered more than the rest from poor parenting and the blind selfishness of others and, as the history is laid bare, her weariness becomes more understandable. At the final stage a special kernel of guilt which Noa carries is revealed, the final link in the chain of circumstances which led her to the executioner.